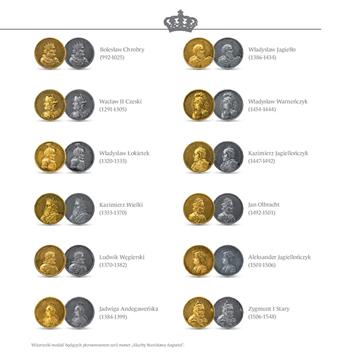 The unique series of gold and silver collector coins with the face values of 500 zloty and 50 zloty – “TREASURES OF STANISŁAW AUGUST” – replicates the famous 18th century medallic series with the images of the kings of Poland, which was struck on the order of Stanisław August Poniatowski. The royal medals, designed by two outstanding medallists: Jan Filip Holzhaeusser and Jan Jakub Reichel, were struck at the Warsaw mint in the years 1791-1797/1798. The design of the medals was based on portraits painted between 1768 and 1771 by Marcello Bacciarelli for the Marble Room at the Royal Castle in Warsaw. The coins issued by the National Bank of Poland are faithful replicas of the medals, preserving the diameter and height of relief of the originals. This applies to the portraits of the kings on the reverses. The obverses of the coins feature the reverses of the medals with biographies of the monarchs. The reverses of the medals have been reduced in size because they are accompanied by the name of the state along the rim, the image of the state emblem, the face value and the year of issue of the coins. The biographies of the monarchs and the inscriptions on the obverses of the medals accompanying the royal portraits are in Latin. The final text editing was most likely done by King Stanisław August himself. The names of the monarchs in Polish are presented on the sides of the coins, a long with the name of the series “Treasures of Stanisław August”.

The gallery of portraits of Polish kings, painted on the order of Stanisław August Poniatowski, consisted of images of 23 monarchs. It included one royal portrait more than Bacciarelli’s series of 22 paintings. The additional portrait of Stanisław Leszczyński – featured on the medal – was most probably modelled on a painting by Jan Bogumił Plersch. Both series, the paintings and the medals, begin with the image of Bolesław Chrobry and end with the portrait of August III. Since the 18th century, the principal place in the Marble Room has belonged to the portrait of the full-length figure of Stanisław August in his coronation robes. The painting is several times larger than other portraits. It is therefore probable that the medallic series would have finished with a medal presenting the image of the ruling monarch. However, these plans were thwarted by the king’s abdication, emigration and early death at the beginning of 1798.

The series of coins “Treasures of Stanisław August” consists of 24 portraits of monarchs – of which 23 have been modelled on the royal series plus a portrait of Stanisław August based on the medals from the period. The series will be struck in silver and gold, as was the practice in the 18th century.

Starting from 2013, the National Bank of Poland will issue the coins from the series four times a year.