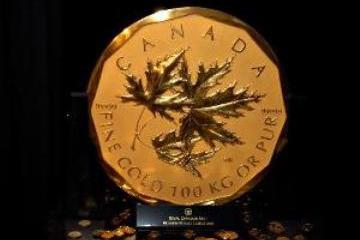 Canada has seized bragging rights for the largest legal tender piece of money in the world, by issuing a coin with a face value of $1 million Canadian.The previous record holder for large coins was the seventy pound 100,000 euro piece from Austria with a fifteen inch diameter. This monetary item, issued by the Royal Canadian Mint, is twenty inches in diameter and one inch thick. It's made of 99.999 percent gold bullion and weighs 220 pounds (100 kilograms). One side of the hefty coin has the face of Queen Elizabeth and the reverse shows a cluster of maple leaves, one of Canada's most well-known symbols.

Its scalloped edge is reminiscent of the country's old-style nickels. The side with the maple leaves has the English words "Fine gold", then "100 KG", followed by the French words "Or pur", which translates as "Pure gold". One of these coins takes six weeks to make.

The editor of Canadian Coin News, Bret Evans, said, "They're (the Canadian Mint) not doing this because there is a huge demand for 100-kilo gold coins. They're doing it because it gives them some bragging rights in having the largest pure gold coin in the world. They'll kick the Austrians out of the Guinness World Book of Records".

The Canadian $1 million coin will be used mostly as a promotional tool, as it already has been by a Japanese coin dealer, to draw attention to smaller, more affordable gold coins. Then again, it would make one fantastic door stop.