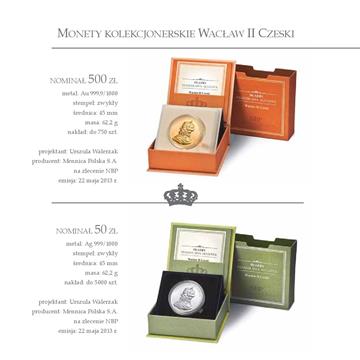 Wacław II Czeski from the Bohemian dynasty of Přemyslids was born in 1271; he became the king of Bohemia in 1283. Taking active part in the political power struggles of Polish parties related to the succession of the Duchy of Krakow following the death of Leszek the Black, he managed to take control of Lesser Poland and accepted the title of Duke of Krakow and Sandomierz in 1291. Next, he was paid homage by the following duchies: Duchy of Bytom, Duchy of Cieszyn, Duchy of Opole, Duchy of Racibórz, and later the Duchy of Legnica and Wrocław. He also took control of Greater Poland and Gdańsk Pomerania, thus winning over Władysław Łokietek (Ladislaus the Elbow-high) in his aspirations to win the crown. In 1300, archbishop Jakub Świnka crowned him the king of Poland in Gniezno. He married Elizabeth Richeza, daughter of King Přemysl II, thus consolidating his power as the king. He introduced a monetary reform in Bohemia by minting Prague groschen, which have become the universal tender in Central and Eastern Europe for two and a half centuries.