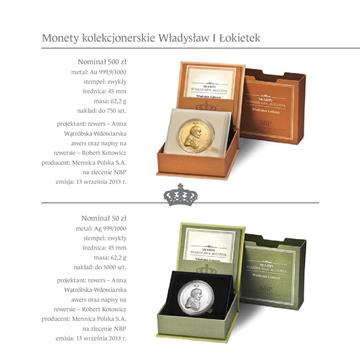 The son of Casmir, duke of Kuyavia, three times banished; when he returned to his motherland he united and merged the dispersed parts of the state. He died A.D. 1333, aged 73, having ruled for 13 years, on 2 March. The third coin in the series is a medal depicting King Władysław Łokietek (Ladislas the Elbow-high or Ladislas the Short), who restored the Piast dynasty to the throne after a short rule of two kings by the name of Vaclav from the Czech Premyslid line. Władysław Łokietek’s greatest merit was to unify vast areas of the Kingdom of Poland after the period of regional disintegration.

The portrait by Marcello Bacciarelli, which served as the model for the medal by Jan Filip Holzhaeusser, shows the king’s bust. His features were most likely modelled on his tomb in the Wawel cathedral. The king is wearing a helmet with chain mail and a tassel as well as rich Reiter armour (although it was anachronous as it was used only in the 17th century).

The medal’s reverse reads (in translation): The son of Casmir, duke of Kuyavia, three times banished; when he returned to his motherland he united and merged the dispersed parts of the state. He died A.D. 1333, aged 73, having ruled for 13 years, on 2 March.

Władysław Łokietek, from the Kuyavian line of Piasts, was born in 1260 or 1261. Initially he was the duke of Brześć in Kuyavia. He enlarged his domain fighting tirelessly with regional dukes, although with varying results. He won, lost and recovered the Duchies of Łęczyca, Sieradz, Sandomierz, Greater Poland and Eastern Pomerania. In 1306, after four-year banishment and the deaths of kings Wacław II (Vaclav II) and Wacław III (Vaclav III), he finally took control of Lesser Poland, and in 1314 of Greater Poland. Despite the victory in the battle of Płowce, he lost Gdańsk Pomerania and later Kuyavia to Teutonic Knights. Western Pomerania, Silesia, Masovia and Czerwień Towns also remained outside of his territory. With the consent of the Pope, he was crowned on 20 January 1320 – not in Gniezno, but in the Krakow Wawel cathedral as the first Polish king crowned there. He struck the first Polish golden coin – the famous florin. Only one such coin has survived until present.