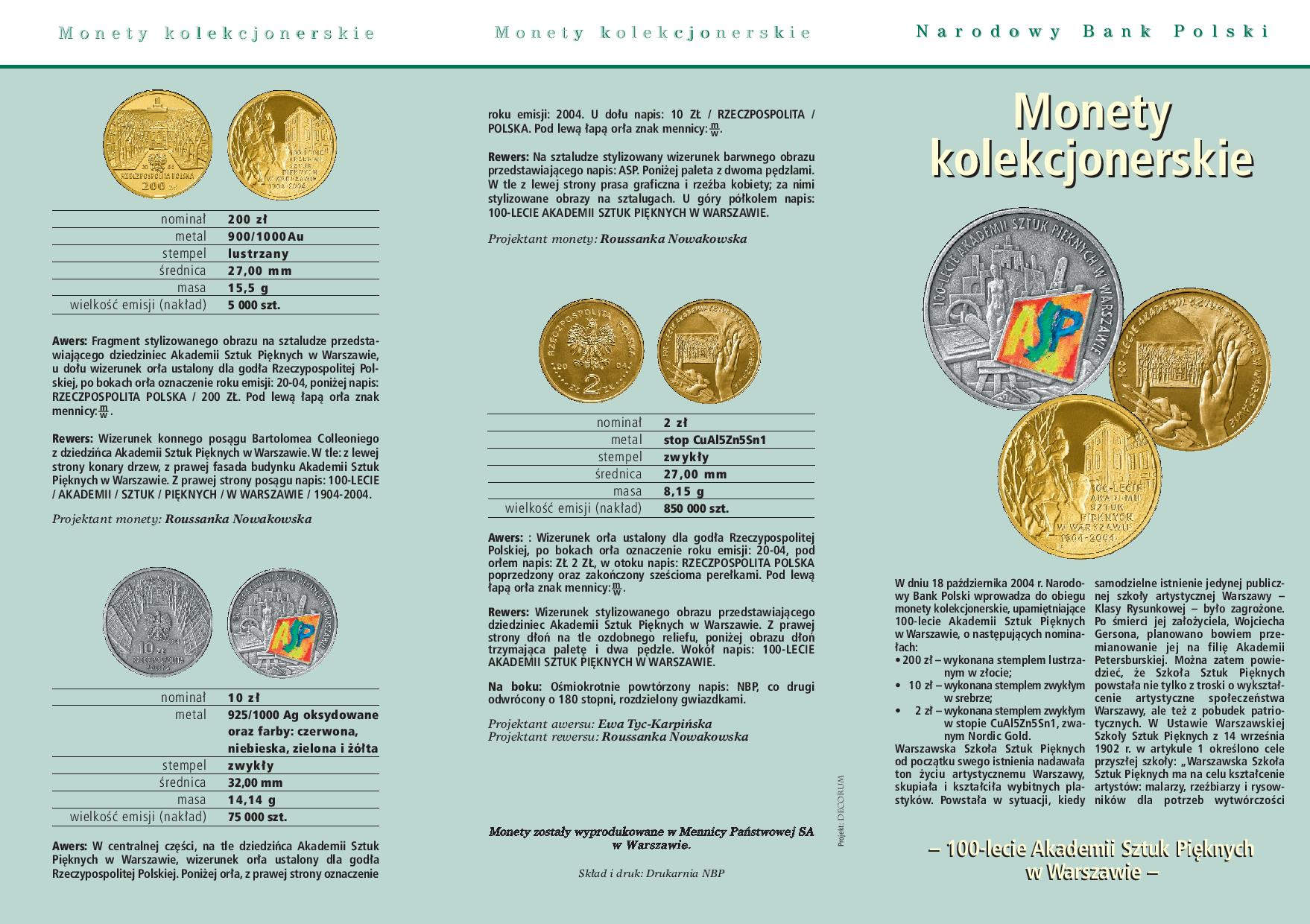 From the moment of its establishment, the Warsaw School of Fine Arts shaped Warsaw's artistic life as well as gathered and educated great plastic artists. It was established at a time when the independent existence of the only public arts school in Warsaw - the Class of Drawing - was threatened. After the death of its founder, Wojciech Gerson, it was planned to convert it to a branch of the St. Petersburg Academy. Thus it can be said that the School of Fine Arts was created not only in order to ensure artistic education for the residents of Warsaw but also for patriotic reasons.Article 1 of the Law of the Warsaw School of Fine Arts of September 14,1902 provided the aims of the future School: "The Warsaw School of Fine Arts aims to educate artists: painters, sculptors and graphic artists for the needs of artistic creativity and artistic-industrial needs, as well as to generally promote the artistic development of the local population." These remained the guiding values regardless of the fortunes of the school, its reorganisation or personnel changes. The one-hundred-year long history of the school has been left with the imprint of the tumultuous events of the 20th century, wars and political changes of our nation.

The school was the brainchild of the painter Kazimierz Stabrowski, an alumnus of the St. Petersburg Academy, and gathered around him a group of citizens, representatives of the aristocracy, landowners and the professions. The first efforts were made in 1902. From the very beginning, the objective was to establish a non-public School because only that status would protect it from being Russified. Among the persons gathered around Kazimierz Stabrowski, his friend Stanisław Kierbedź, an engineer, contributed great services in the School's organisation. The School was officially opened on March 8,1904 as the School of Fine Arts. Its first Director was Kazimierz Stabrowski and the School Guardian Committee was headed by Maurycy Zamoyski. The Committee included other well-known citizens, including Adam Krasiński and Doctor Teodor Dunin, a physician. The School was financed from private contributions - already in April 1903, one hundred and sixty persons, landowners, industrialists and intellectuals declared 45,610 roubles in contributions. The first professors of the School - except for Kazimierz Stabrowski - were young artists, the leading representatives of Polish modernism at the turn of the 19th and 20th century, painters: Ferdynand Ruszczyc, Konrad Krzyżanowski, Karol Tichy and the sculptor Ksawery Dunikowski. Each of them has a significant place in the history of Polish art. Karol Tichy worked at the School the longest until 1939; others left it after a few years and their place was taken by equally outstanding artists. Classes were held in several locations in Warsaw. At the beginning, the main building was situated at Wierzbowa 8 where it housed several large painting studios, a place for a weaving workshop and a design studio. There were also two studios at Hoża 35, which housed the studios of Karol Tichy and Ksawery Dunikowski. This state of affairs lasted until 1909 when, due to lack of money, the studios at Wierzbowa were closed and classes were held only in Hoża and in flats of professors. Problems with accommodation were overcome thanks to the generosity of Stanisław and Eugenia Kierbedź, who leased a parcel of land from the city and financed the construction of a building designed especially for the School's needs. In 1915, the School moved to a new building at Wybrzeże Kościuszkowskie 37. From the start, the School enjoyed great popularity; 157 students were admitted in 1904. One novelty was co-education, which was not practiced at the Cracow Academy at that time - girls were only officially admitted there from 1920. At the Warsaw School of Fine Arts, often over half of the students were girls. In 1907, Stabrowski wrote: "In accordance with the original assumptions, the School's links to handicrafts were emphasised. In face of the high prestige of the Academies of both Cracow and St. Petersburg that engage in pure art, we do not want to open exclusively the same type of School and wish to include to a greater extent the applied arts... It is not that we want to debase the concept of art and transform it into a craft but on the contrary, we want to develop ourselves towards an artistry of the crafts." This concept, along with co-education, distinguished the School's curriculum from others.

According to the declaration of the School's curriculum, apart from the painting and sculpture studios, there were two studios of applied arts: Tomasz Pajzderski's studio, opened in 1905, and Edward Trojanowski's studio, opened a year later. These produced stained glass, lamp and lampshade designs, kilim designs, advertising graphics, ceramics. Apart from practical classes in painting, sculpture, graphic arts and applied arts, theoretical subjects such as anatomy, art history (taught by Eligiusz Niewiadomski), the science of perspective and physics were also taught at the School. Open-air workshops were obligatory during the summer vacations; Konrad Krzyżanowski took his students to Arkadia, Zwierzyniec, Istebna; Ruszczyc organised such workshops at Warsaw's Łazienki, Solec, Saska Kępa and in Włochy outside Warsaw, or in Kazimierz on the Vistula. Thanks to Eugenia Kierbedź who had students staying at her Rybiniszki estate in the Witebsk Province, winter trips were possible. The School also organised Sunday and evening drawing courses for craftsmen and children. The hardships of the First World War caused the financial standing of the School to deteriorate. Being a private institution, it was primarily supported by the city, and from 1919 from the state budget. Financial problems caused classes in the School to be suspended. In the period from 1918 to 1921, the premises at Wybrzeże Kościuszkowskie were rented out to the State Pedagogical Courses for Drawing Teachers, organised by the Ministry of Culture. The courses were run by professors from the School. Karol Tichy directed the courses and taught painting, and Tadeusz Breyer taught sculpture, while Eligiusz Niewiadomski and Stanisław Noakowski gave lectures on art history.At the same time, efforts were made to nationalise the School.

In 1922, the Warsaw School of Fine Arts, now state-owned, was established. At the same time it was attempted to give the School academic status. It gained the status of an Academy in 1932 and in 1934 it was granted full academic rights. Until 1932, it was headed by a director and afterwards by the Rector of the Academy. Karol Tichy was the first Director, succeeded by Józef Czajkowski, Miłosz Kotarbiński and Władysław Skoczylas. The first Rector was Tadeusz Pruszkowski, followed by Władysław Jastrzębowski, who remained at the post until 1939. At the beginning, a full academic programme lasted five years, the first three being devoted to general studies, and the remaining two spent in a given master's studio. In the 1930s the education at the Academy was shortened - the studies were divided into two initial years and two years of specialisation. The main courses at the Academy were those of painting, sculpture, graphic arts and applied arts; artistic pedagogy was taught as the fifth specialisation. Classes in book design, lettering, decorative painting, carpentry, weaving, pottery and stage design were also run. The School's curriculum was among the best curricula of fine arts in Europe in the interwar period. At the International Exhibition of Modern Decorative and Industrial Arts in Paris in 1925, the School of Fine Arts was awarded a gold medal for its curriculum, and twelve years later many of its alumni won important awards at the "Art and Technology" world exhibition. The Academy was run by leading artists and teachers, who were often actively involved in the country's public affairs. These included Karol Tichy, Władysław Skoczylas, Tadeusz Pruszkowski, Wojciech Jastrzębowski, Tadeusz Breyer, Stanisław Bartłomiejczyk, Leonard Pękalski and Felicjan Szczęsny Kowarski. In each field of art, a large emphasis was put on learning workshop techniques and on independent thinking at the same time. Together with their professors, the students formed a lively academic community; balls and nativity plays organised by the Academy were famous, as were summer open air workshops in Kazimierz on the Vistula or Nowe Miasto on the Pilica. On leaving the Academy, Tadeusz Pruszkowski's graduating students formed artistic groups that had a significant place in the history of art of the interwar period. The Warsaw Academy educated many great painters, sculptors, graphic artists and artists engaged in various fields of handicraft, who contributed to the Warsaw style of the 1930s. The outbreak of the Second World War interrupted the School's life. Professors Mieczysław Kotarbiński, Tadeusz Pruszkowski and Leonard Pękalski perished, Karol Tichy died and the Academy last Rector, Władysław Jastrzębowski, returned from emigration only in 1947. A renowned graphic artist and professor of the Academy before 1939, Stanisław Ostoja Chrostowski, was appointed the first post-war Rector. He was given the task of organising the Academy, which had lain in ruins. The financial standing of the School was difficult. The Academy's building at Wybrzeże Kościuszkowskie 37 was destroyed. Classes were held in several locations in the city. The current premises - the Raczyński Palace at Krakowskie Przedmieście - were granted to the Academy in 1947, but the entire renovated palace premises were put into use only in 1951.

At the beginning, at the re-established Academy there was a predominance of developing foremost the pure art - painting, graphics and sculpture. They were represented by professors Jan Cybis, Eugeniusz Eibisch and Zbigniew Tomorowicz - the former Kapists and alumni of the Cracow Academy, who prior to 1939 stood in opposition to the Warsaw School's curriculum. This state of affairs was short-lived, as a new curriculum was imposed by party authorities. During a convention of rectors and delegates of fine arts schools in Nieborów in April 1950, the principles of socialist realism were established and the movement was imposed as obligatory in art, and thus also at the Academy. Work discipline and schooling in ideology were introduced for students and professors; contacts with modern Western art were cut off. In 1950, the School's structure was reorganised with the Academy of Fine Arts being amalgamated with the State Academy of Decorative Arts, the latter primarily oriented at the applied arts.The name of the Academy was changed to the Academy of Plastic Arts with eight faculties: Painting, Sculpture, Graphic Arts, Interior Architecture, Monument Conservation, Weaving, Scenography and Pedagogy. Independent thinkers among the faculty were dismissed.

The Academy changed again with the "thaw" of 1956. In 1957 it returned to its traditional name, the Academy of Fine Arts. Earlier in 1952, Artur Nacht-Samborski was reinstated and in 1957 Jan Cybis; they were both professors of great artistic authority. This meant that a colourist direction in painting was once again allowed - in line with the Cybis motto that "canvas should not be executed, but should rather be painter decided" - and based the hierarchy of relations within the Academy on the master-student relationship. International contacts were broadened and intensified. At the same time, interest in abstract art heightened at the Academy.Aleksander Kobzdej, Bogusław Szwacz, Jerzy Tchórzewski, Roman Owidzki, Stefan Gierowski and others became connected with the Academy. In the 1959/1960 academic year Marian Wnuk was appointed Rector and under his direction the Academy was consolidated and new initiatives were undertaken. Interior architecture and industrial design flourished.The "Polish Poster School" became world famous. Józef Mroszczak, professor of the Academy, launched the International Poster Biennial in 1966. In 1972 the Postgraduate School of Scenography directed by Józef Szajna was established. The present Academy of Fine Arts is the successor of the Warsaw School of Fine Arts. It comprises six faculties: Painting, Sculpture, Graphic Arts, Artwork Conservation and Restoration, Interior Architecture and Industrial Design. It employs over 270 academic teachers and co-operates with many fine arts schools in Europe.