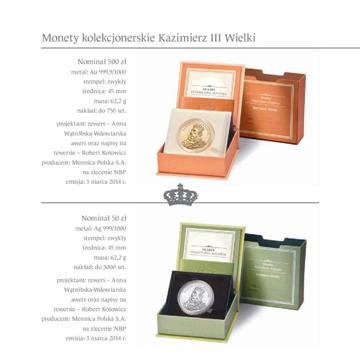 In translation the reverse of the medal reads (on the coin the original text is slightly shortened): The Son of Łokietek, the first who collected the native rights and announced them in Wiślica, fortified many towns, incorporated Red Ruthenia into the Crown, desired to make and made citizens and farmers happy; the last king of the House of Piast. Died on the 5th of November 1370, at the age of 60, having ruled for 33 years.

The long reign of Casimir the Great, born in 1310, yielded many benefits to the country. The King reinforced power in the hereditary districts – Greater Poland, Sieradz and Wieluń Land, Lesser Poland and Kuyavia. Losing Gdańsk Pomerania to the Teutonic Knights, and in 1348 – the Silesian principalities to Bohemia, he directed his expansion towards the east and south. He annexed the Principality of Galicia–Volhynia (Red Ruthenia) and subordinated Mazovia and Podolia. The trade route connecting the Baltic Sea with the Black Sea was established. The economy boomed, supported by modernisation measures – the unification of law, settlement of towns, as well as treasury and military reforms. The country gained dozens of new castles and many secular and church buildings. In 1364 the king founded Kraków Academy, the first Polish university. He carried out a monetary reform, creating new monetary units, including the first thicker silver coin – the Kraków grosz.