Treasures of King Stanislaw August – Louis I of Hungary 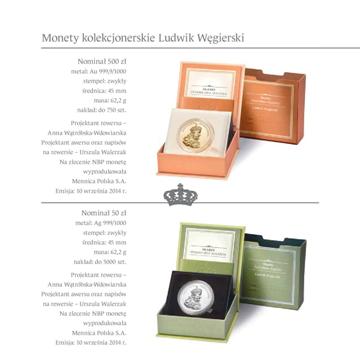 The fifth coin of the series commemorates Louis I from the French Angevin dynasty (d’Anjou), son of Charles Robert and Elizabeth of Poland. Louis was King of Hungary from 1342, and in 1370 – under previously made arrangements regarding the succession of the Angevins to the Polish throne in the event there were no male descendants of Casimir the Great – he became King of Poland.

The medallic image of Louis, bearing resemblance to the portrait by Marcello Bacciarelli, shows the right profile of the king, with a beard, wearing a robe with rosettes and a buckled coat. He has an ornamental crown on his head, different than the one in the portrait.

The medal’s reverse reads in translation (on the coin’s obverse in an abbreviated version): From a French house, son of Charles of Anjou, King of Hungary, and King of Hungary himself nephew of Casimir the Great from his sister Elizabeth’s side, he gave many privileges to the nobility. He died in Trnava A.D. 1382, aged 56, having reigned Poland for 12 years, on 12 September.

Louis, born in 1326 in Visegrád, became King of Poland after 28 years of successful reign in Hungary (where he was nicknamed the Great). In Poland, after his coronation in Cracow on 17 November 1370, it was his mother, Elizabeth of Poland, and later bishop Zawisza Kurozwęcki, who reigned in his stead during Louis’ frequent absences; a prominent role was also played by Duke Vladislaus II of Opole. In order to obtain permission for his daughters to succeed to the throne, Louis granted the Polish szlachta (gentry) the Privilege of Koszyce in 1374, which included tax exemptions and other liberties. This way he weakened the royal authority but laid a cornerstone for the later nobles’ democracy. He waived claims on Silesia in favour of Bohemia and gave Red Ruthenia to the Hungarian crown. He fought victorious battles for Hungary in the Balkans and towards the end of his life conquered Dalmatia and Dubrovnik. He died in Nagyszombat (in Latin Tyrnavia, currently Trnava in Slovakia) in 1382.