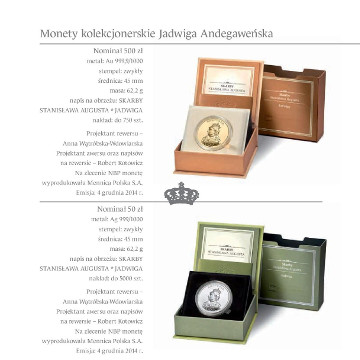 The sixth coin of the series commemorates Jadwiga of Anjou, daughter of Louis I of Hungary, who was crowned Queen of Poland in 1384. In 1386, Jadwiga was married to Ladislas Jagiello, Grand Duke of Lithuania. Despite her young age, thanks to her strong international position and wise politics, she gained prestige and respect. Known also for her piety and charity, publicly venerated, Jadwiga was canonized by the Roman Catholic Church in 1997. The medallic image of Jadwiga, referring to her portrait by Marcello Bacciarelli, shows her left profile, with a veil and an ornamental crown on her head, a folded dress and a double strand pearl necklace.

The medal’s reverse reads in translation (on the coin’s obverse in an abbraviated version): The third daughter of Louis, crowned Queen of Poland A.D. 1384, on 15 October. Married to Ladislas Jagiello on 17 February A.D. 1386. She restored to Poland Red Ruthenia from Hungary’s occupation. Died A.D. 1399, aged 28, on 17 July.

Born in 1373 or 1374, Jadwiga succeeded to the throne of Poland at the age of ten; she ruled on her own for two years, then thirteen years together with Ladislas Jagiello. Well educated, she actively participated in politics and diplomatic mediations with Dukes of Lithuania Vytautas and Skirgaila as well as with the Teutonic Order. In 1387 she recovered to Poland Red Ruthenia, which had been incorporated into Hungary by Louis I of Hungary after the death of Casimir the Great. She contributed to the restoration of the Cracow Academy – she left her dresses and jewels to the Academy in her last will. She performed a wide variety of funding and charitable activities, she encouraged translations of Latin sacral texts into Polish. She died after giving birth to her daughter Elizabeth Bonifacia, who also died in 1399.