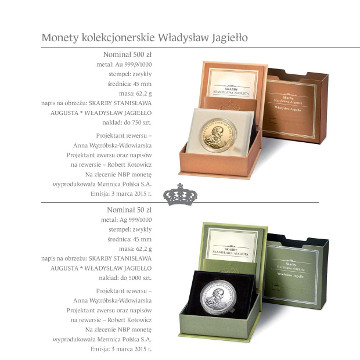 The seventh coin of the series shows Jagiello, the ruler of Lithuania from 1377. He was crowned King of Poland in 1386, following his baptism, his marriage to Poland’s Queen Jadwiga of Anjou and the adoption of the name of Władysław (Ladislas). Fulfillment of these commitments resulted in the formation of the personal union between Poland and Lithuania and initiated the Christianization of Lithuania. Thus Ladislas became the founder of the Jagiellonian dynasty, which ruled a significant part of Europe.

Medallic image of Ladislas, though imitating a portrait by Marcello Bacciarelli, is wrong because the painter had wrongly chosen the portrait of Sigismund-Augustus as a model. On the medal, the sovereign is shown in the right profile, bareheaded, with abundant beard and a coat draped around his shoulders. His left hand rests on a shield featuring the Lithuanian coat of arms, Vytis (the Chaser).

The medal’s reverse reads in translation (on the coin’s obverse the text is in an abbreviated version): Algirdas’ son, designated Jadwiga’s spouse A.D. 1385, crowned in 1386. He joined Lithuania and Poland together, made Lithuania Christian, founded the Academy in Cracow, defeated Teutonic Knights at Grunwald, and decided that no nobleman could be held in custody without a court ruling. He died A.D. 1434, at the age of 86, in the 48th year of his reign, on 31 May.

Ladislas was born under the name of Jogaila. His date of birth is still unknown (between 1351 and 1362) and subject to debate. He was the son of Algirdas, Grand Duke of Lithuania from Gediminid dynasty. Looking for allies to fight the Teutonic Knights, Jagiello turned to Poland. Under the Treaty of Krevo, in exchange for the Polish throne, he undertook to convert Lithuania into Christianity and to establish a union with Poland. The union benefited both countries politically, economically and culturally. He halted the expansion of the Teutonic Order and won the famous victory at Grunwald (1410). He joined a part of Spisz to Poland, restored Dobrzyń Land to Poland and Samogitia – to Lithuania. He received homage from Moldova and entered into an alliance with Brandenburg. To maintain the Dynasty he gave the nobles numerous priviledges, including famous act neminem captivabimus nisi iure victum (we shall imprison noone except if he has been lawfully sentenced). In 1400, he restored – thanks to Jadwiga’s donation – the Academy in Cracow, which was later named the Jagiellonian University.