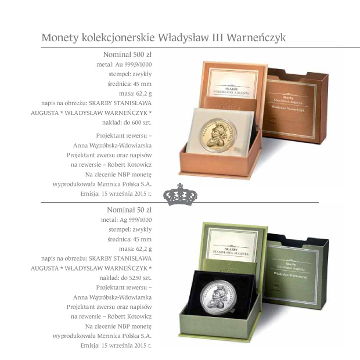 The eighth coin in the series depicts Ladislas of Varna, son of Ladislas Jagiello, crowned in 1434 as King of Poland, titular Grand Duke of Lithuania, and in 1440 as King of Hungary. In 1435 he received the homage of the Voivode of Moldavia and signed the Peace of Brześć Kujawski with the Teutonic Knights. His short reign was divided between Poland and Hungary.

The medal image of the king, based on a portrait painted by Marcello Bacciarelli, depicts the bust of an armoured man facing left. There is a wound on his temple, with blood running from under his broken helmet. A crown is placed on his helmet and there is a medallion of the Virgin Mary with Child hanging on his breast – on a decorative, 17th century-style armour.

On the reverse of the medal (on the averse of the coin the text is slightly shorter) it reads: Jagiello’s oldest son, intended as King of Poland during the life of his father, crowned as King of Hungary in the year of the Lord 1440. At the Battle of Varna against the Turks, he fell victim to treacherous advice and was killed in the year of the Lord 1444, at the age of 20, on the 10th of November in the eleventh year of his reign in Poland.

Ladislas, the first-born son of Ladislas Jagiello and his fourth wife, Lithuanian princess Sophia of Halshany, was born in 1424. On behalf of the minor king, crowned at the age of 10, the regency was held by a royal council, above all, by the Bishop of Cracow, Zygmunt Oleśnicki, who paved Ladislas’s way to the Hungarian throne. Despite the signed truce, as the leader of the victorious European crusade against the Turks in the Balkans (1443–1444), Ladislas undertook another expedition to Adrianople and was killed in the Battle of Varna. The king’s body was never recovered, the fact which underlay the legends about him surviving the battle and was the reason for a threeyear delay in acclaiming a new King of Poland. In 1906 a symbolic tombstone of Ladislas of Varna was erected in the Wawel Cathedral, and in 1935 a monument to him was built in Varna.