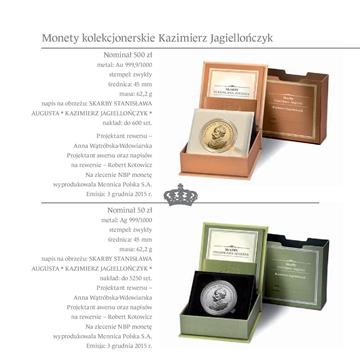 The ninth coin in the series depicts Casimir Jagiellon, the younger brother of Ladislas of Varna. His long reign was a very fruitful one as it saw the incorporation of Prussian territories, the Duchy of Oświęcim and a part of Mazovia into the Kingdom of Poland.

Of the 13 children born of his marriage to Elisabeth of Austria (known as the mother of kings), four of his sons were crowned, one was granted the nimbus of a saint and five daughters married into renowned European ducal families. The Jagiellonian dynasty became a significant political power in 15th-century Europe.

In the medallic bust of the king (modelled on a portait painted by Marcello Bacciarelli) the facial features bear resemblance to the tombstone sculpted by Wit Stwosz (Weit Stoss) in Wawel Cathedral. The medal features the king’s head covered with a fur cap decorated with a hat brush, and by the cloak fastened with a buckle there is a shield bearing the coat-of-arms of Royal Prussia.

The inscription on the reverse of the medal reads (in translation): Jagiello’s second son, having, at the inhabitants’ request, liberated Prussia from the Teutonic yoke, returned it to the Crown and made it a province. He died in Grodno A.D.1492, at the age of 66, in the 45th year of his reign, on 7 June.

Casimir, born in 1427, the son of Ladislas Jagiello and Zofia Holszańska, was proclaimed Grand Duke of Lithuania in 1440, but the personal Polish-Lithuanian union was formally renewed only after his coronation in 1447. The development of the Vistula-borne trade, the political emancipation of towns in the Teutonic state and the establishment of the Prussian Union all led to the issuing of the act of incorporation of Prussia into Poland in 1454. Following the Thirteen Years War with the Order of the Teutonic Knights that ended with Poland’s victory in 1466, Poland gained Gdańsk Pomerania (Pomerelia) and part of Prussian territories. The Order became a vassal to the Polish Crown. For his son, Ladislas, the king obtained the crowns of Hungary and Bohemia. Polish nobles were awarded new privileges. Science and culture flourished; Jan Długosz wrote his monumental history of Poland and Wit Stwosz (Weit Stoss) created his altarpiece in St. Mary’s Basilica in Kraków.