1050th Anniversary of the Baptism of Poland 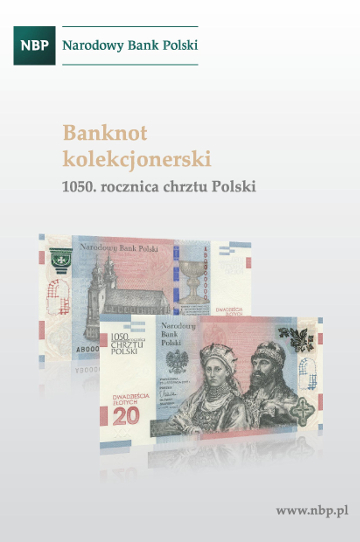 It was 1050 years ago that a crucifix was erected on Polish soil, and Prince Mieszko I was baptized. The baptismal font of Mieszko I became the symbolic cradle of the emerging nation and a symbol building its identity. The consequences of this event were most dearly expressed by Cardinal Stefan Wyszyński, who spoke of a "baptized nation", the 'baptism of the nation" and thus the baptism of Poland. At that moment we were introduced to a new world, embodied in a new culture, new institutions, structures and legal provisions, permeating the political, economic, social and cultural life.

The person who had a substantial influence on Mieszko I during this process was undoubtedly his Bohemian wife Dobrawa. The prince learned the basic tenets of faith from her. We could call her Poland's godmother. It is therefore no wonder that the front side of the banknote issued on the occasion of the 1050th anniversary of the baptism of Poland features the image of the royal couple — of course, as portrayed by Jan Matejko in his gallery of Polish kings and princes. Above Dobrawa's head there is a stag among the foliage, looking as if it has jumped straight out of the rinceaux of the Gniezno Doors. In early-Christian symbolism this animal represents the enemy of snakes. Sensing its own impending old age, the stag draws a snake out of its hole with its own breath. Once it is bitten and feels the venom spreading through its body, it drinks water from a spring, sheds its old coat, becomes rejuvenated and reborn to a new life. The symbolism here is all too obvious: the water that saves is the water of baptism giving a new life; the stag symbolizes a Christian, reborn through the power of baptism. Next to Mieszko I's left arm we can see the staurotheke from Ostrow Lednicki (a cross-shaped reliquary), probably brought to Poland by Otto III. It is one of the oldest Christian artefacts in our land — almost old enough to remember the year 966. The same staurotheke appears as a security feature visible under ultraviolet light.

Moving on to the reverse side of the banknote, we can see the Gniezno Cathedral in its present Gothic-Baroque form. This is a unique temple in the history of our nation. Its origins date back to the 10th century, and it is the successor of the churches built by Mieszko I and Boleslaw the Brave. In the past it served as the coronation hall for Polish kings and was the site of many important historical events, including the famous Congress of Gniezno in 1000, when Emperor Otto Ill visited the tomb of St. Wojciech This event resulted in the creation of the first Polish archdiocese in Gniezno, and in the longer run led to the growth of Poland's importance on the international arena and the coronation of the king. It is therefore understandable that the Gniezno Cathedral is defined as Mater Ecdesiarum Poloniae, or the Mother of Polish Churches. The plan of this famous temple also appears in one of the banknote's security features, the so-called see-through register. Next to the cathedral, on its eastern side, we can see the royal chalice from Trzemeszno, forged around the year 1190 from repoussaged, engraved, and largely gilded silver. It has a very rich iconography mostly based on the Books of Kings from the Old Testament (hence one of its names). Its foot and bowl are covered with images depicting the history of Israel. On the banknote, the bowl of the chalice proudly depicts Nathan and Joab crowning David as King. All the events illustrated on the chalice present a perfect image of Christian society, pursuing the harmonious cooperation of the secular and ecclesiastical power. Next to the chalice's bowl, among the foliage derived from the Gniezno Doors, a peacock is hiding. According to the ancients, its meat never rots and the expanded tail feathers are the image of heaven. That is why the peacock became a symbol of immortality and eternal life, which one enters through the sacrament of baptism.

Thus, the symbolism presented on the banknote is reminiscent of the times of Poland's baptism — a ground-breaking event in our history. It reminds us not only of its theological dimension, but also of its political, social and cultural consequences.

Rev. Jarosław Bogacz
Diocesan Conservator of the Archdiocese of Gniezno