600th Anniversary of the Birth of Jan Długosz 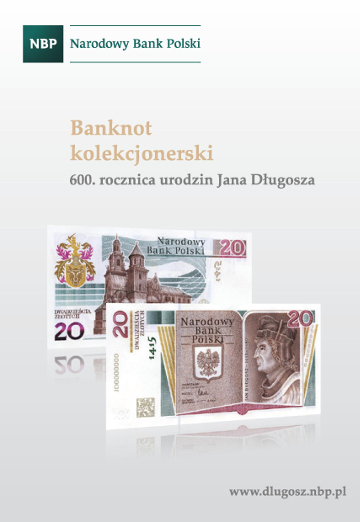 Jan Długosz of the Wieniawa coat of arms — historian, king's diplomat and Canon of Cracow. Długosz was born into a middle class noble family in 1415 in the village of Brzeinica situated in the Sieradz area. At the beginning he attended the parish school in Nowe Miasto Kroczyn and in 1428 he enrolled at the Cracow University. After three years he interrupted his studies and never graduated. From 1431 he stayed at the court of the Cracovian bishop, Zbigniew Olegnicki, gradually becoming his most trusted co-worker. Thanks to the bishop's support, he gained successive church distinctions: he was the parish priest in Klobuck, the Canon of the Cracow cathedral, the cantor and the custodian of Wielica and the Canon of Sandomierz. On behalf of the bishop, he was also sent on diplomatic missions; among others, in 1450 he brought the Cardinal's hat for Oleśnicki from the Pope.

After Oleśnicki's death, Jan Długosz supported King Casimir Jagiellon. On behalf of the ruler, he was sent on numerous diplomatic missions, and from 1467 he was the tutor of the King's sons. At the end of his life, in 1479 he was appointed as the Archbishop of Lviv. How-ever, he was not able to take over this position. He died in Cracow on 19 May 1480 and was buried in the cathedral on Wawel Hill. In 1880 the remains of Długosz were moved to the Pantheon in the Pauline Fathers Monastery, Skalka, of which he was the founder.

Jan Długosz was one of the most distinguished Medieval historians. His most important work is the "Annals or Chronicles of the Famous Kingdom of Poland" (Annales, seu cronicae incliti Regni Poloniae) — the history of Poland described in twelve extensive books, from the legendary beginnings until 1480. He was also the author of several catalogues of Polish bishops, the description of Teutonic Knights' coats of arms (Banderia Prutenorum), the first Polish book of coats of arms (Insygnia seu clenodia Regni Poloniae), the lives of St. Stanislaus and St. Kinga, the historical treaty on incorporation of Mazovia to the Crown (Articuli de incorporatione Masoviae), as well as the register of properties of the Cracow Diocese (Liber beneficiorum dioecesis Cracoviensis).