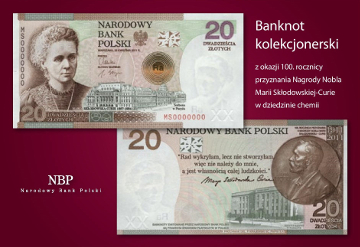 She was descended from a learned Polish intelligentsia family with strong patriotic traditions, which derived from two noble families – of the Topór (the Boguski bloodline) and of the Dołęga (the Skłodowski bloodline) clans. Raised with respect for science and scientific achievement, she received a sound education, which made it possible for her to take up studies at the Sorbonne in Paris. She was a person of many talents and was fluent in several languages. Yet Skłodowska took a special interest in the exact sciences, staying under a strong intellectual influence of her father and the then prevailing Positivist ideology. Having graduated from the Third Government Gymnasium for Girls in Warsaw with a gold medal, which qualified her to pursue university education, she started to work as a governess to earn money for tuition fees at the Parisian Sorbonne she dreamt of so much. In the end of the nineteenth century, in the dark days of Poland’s partition by the neighbouring empires, no university in the occupied territories would offer education to talented women, which forced them to leave the country if they wished to advance learning. Before leaving Warsaw, however, Skłodowska had a chance to work at a chemical laboratory, which confirmed her choice of the area of interest. In the chemical laboratory of the Warsaw Museum of Industry and Agriculture, under supervision of Professor Napoleon Milicer and doctor Władysław Kossakowski, Marie conducted experiments in the field of chemical analysis. Years later she admitted that hadn’t she learned proper chemical analysis while at Warsaw she would not have isolated radium. Passion, perseverance, love of knowledge and trust in the beauty of science led Marie Skłodowska to study at the Sorbonne, where she graduated coming first in physics and second in mathematics. Hard work at a laboratory then won Skłodowska highest respect and scientific honours as well as university assignments.

In 1895, Marie married a French physicist, Pierre Curie, and embraced French citizenship. She would then bear the double-barreled surname Marie Skłodowska-Curie (though following the French custom she would sign herself Marie Curie-Skłodowska, M.Curie or Madame Pierre Curie). The couple would sign together all scientific work they published in specialist periodicals or the communiqués they sent to the French Academy of Sciences, thereby confirming equal share of each spouse in the scientific work. In 1903 Marie Skłodowska-Curie, as the first woman in history, received the Nobel Prize. The prize was awarded to Marie and Pierre Curie and the French physicist Henri Becquerel for discovering the phenomenon of radioactivity.

She was the first female student to have graduated from the Faculty of Mathematical Sciences at the Sorbonne coming first in physics, and the first woman to get her Ph.D. there. In 1906, following the tragic death of Pierre Curie, Marie was the first woman allowed to hold a lecture at the Sorbonne. Two years later she became the first female professor at that university (a title held by no woman prior to her). Similarly, in 1911-1933 she was the only woman to participate at the Solvay Conferences – international meetings of the prominent physicists of her time. Finally, she was the only woman and the only scientist to have received the Nobel Prize for the second time, and in another scientific discipline too. In 1911 Skłodowska was individually awarded the Nobel Prize in chemistry for the discovery of polonium and radium and the studies on isolation of radium in its metallic form.

Scientific research and discoveries by Marie Skłodowska-Curie revolutionised science and perception of the atom, paving the way to the development of contemporary physics and the emergence of new scientific disciplines, such as radiation chemistry or nuclear physics. Her works enabled the construction of nuclear reactors and power plants, and the discovery of radium and its application in medicine laid foundations to a new method of treatment of cancerous diseases – Curietherapy, and significant advancement in oncology.

Marie Skłodowska-Curie died in France on 4 July 1934. She was buried in the Curie family grave at the cemetery of Sceaux near Paris. In 1995, the remains of Marie and Pierre Curie were interred in the French Pantheon, next to France’s other leading minds. Marie Skłodowska-Curie was the only woman to be honoured for her personal contribution to science in this way, and the only person born outside France laid to rest in the Pantheon.