The 200th birthday anniversary of Juliusz Słowacki (in polish) 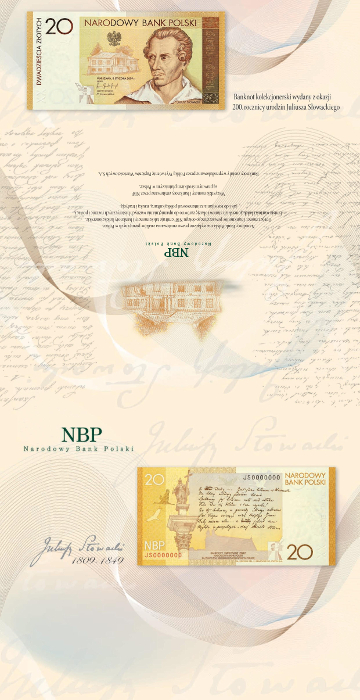 As early as the second half of the 19th century, Słowacki earned one of the top places in the Pantheon of Polish poets of the Romanticism, between Adam Mickiewicz and Zygmunt Krasiński.

Słowacki, along with Mickiewicz, created Polish national poetic drama. He was a precursor of irony and grotesque in the Polish literature, and author of poems as well as reflective and philosophical lyrics. To this day, he is a lasting source of ideological and artistic inspiration.

Born in Krzemieniec, he died in Paris at the age of 40. Still, he was strongly attached to Warsaw, where he arrived on 15 February 1829. In Warsaw, he worked in the Ministry of Treasury of the Kingdom of Poland (when the November Insurrection broke out, Słowacki moved to the insurrectionary diplomatic bureau of Prince Adam Czartoryski). On 3 March 1831, he left Poland and moved to Western Europe with a diplomatic mission, yet, at that time, ”praising the revolution”. He joined the Insurrection as a signatory of Akt Jedności and upon publication of his Hymn in December 1830 and January 1831, became the leading poet of the November Insurrection. The two patriotic works: Oda do wolności and Kulik published together in December 1830 as a booklet, prove that it was Warsaw where Słowacki became the national poet. In January 1831, inspired by Adolf Januszkiewicz, he wrote Pieśń legionu litewskiego and the first two cantos of the poem Żmija.

On exile, Słowacki would often return to the memories of the first months of the November Insurrection which he spent in Warsaw. These memories recur in his letters and literary works where Warsaw of the times of the Revolution is motioned eight times. The poet depicted the city as the centre of ideals and revolutionary fights for independence on three occasions. Warsaw motifs which are most deeply embedded in Słowacki’s works can be found in: Kordian (1833), Ofiarowanie z Poema Piasta Dantyszka (1833) and Uspokojenie (Reassurance) (1845-47). The events of the November Insurrection are also mentioned in the poem Sowiński w okopach Woli (Sowiński in the Trenches of Wola) (1845).

Uspokojenie (Reassurance) is one of the most poetic visions of Warsaw originating from Słowacki’s philosophy of Genesis, according to which all the history and the universe develop exclusively due to violent changes of material forms. This magnificent description of the city precedes other urban motifs which appeared only several dozen years later, like, for example, the ones present in Arthur Rimbaud’s works.

Juliusz Słowacki was very sensitive to the developments both in Poland and in Europe, therefore, in his literary works, he commented on them in the spirit of political revolutionism and the Polish reason of state. Starting with Lilla Weneda, through Sen srebrny Salomei (The Silver Dream of Salomea) and Zawisza Czarny up to Król Duch (King the Spirit), Słowacki depicted the greatness and tragedy of the nation whose independence was lost, but which would be reborn politically, as this is imposed by the logic of the genesis of the universe development. Even in his early great dramas like Kordian, Balladyna or Horsztyński he pursued his idea of national poetry.

This idea is also present in Beniowski (1841), a digressive poem, which proves to be the height of Słowacki’s artistic abilities. The poet, using literary motifs and conventions in a masterly manner, engaged in polemics with his opponents on exile. Already at that time he was Adam Mickiewicz’s antagonist and 25 years later Słowacki was placed right behind him in the hierarchy of the national bards of the Romanticism.

It is worth mentioning that Słowacki, for a short time, had contact with the banking sector when, for over a year, he worked as a legal trainee in the Ministry of Treasury of the Congress Kingdom of Poland. Although this fact did not influence his poetry, it helped him in his life. The poet always kept scrupulous accounts and in Paris played the stock market, often with success. This is why he could afford a one-year journey to Greece, Egypt and Palestine. Such famous poems as Hymn o zachodzie słońca (Hymn at Sunset), Podróż do Ziemi Świętej z Neapolu (Voyage to the Holy Land from Naples) or Anhelli were created there.