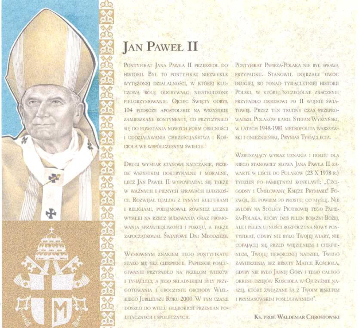 The National Bank of Poland's public presentation of a collector note design depicting Pope John Paul II was held on Wednesday, 19 April 2006. This will be the first collector note in the history of Poland. The issue of the collector note has been scheduled for 16 October 2006, i.e. the anniversary of Karol Wojtyła's election to the papacy.

Designed by Andrzej Heidrich, the note will have a face value of PLN 50. The obverse of the note symbolically depicts a role of the Holy See and the Pope's mission (universal perspective) and the reverse features the pontificate of John Paul II from the Polish perspective by placing it in Poland's most recent history.

The face of the note contains a portrait of John Paul II holding his pastoral cross against the background of a stylized globe, which is a symbol of the pontificate's universal nature. The Pope is wearing his pontifical vestments and is performing a greeting gesture. In his hand, he is holding a crosier - a symbol of papal power. The right-hand bottom side of the note contains the following inscription: John Paul II" and the pontificate's term: 16 X 1978 - 2 IV 2005.

The reverse of the note shows an episode which occurred during the Holy Mass for the inauguration of the pontificate of John Paul II and depicts a special relationship between the Pope and Cardinal Stefan Wyszyński. As the Cardinal paid homage, John Paul II rose and performed a memorable gesture to express his respect to the Primate of Poland. On the right-hand side of the scene there is a quotation from Letter to Poles read out by John Paul II to his countrymen who congregated in Vatican Paul VI Hall on the day immediately following the event: There would be no Polish Pope on this Chair of St. Peter [...] if it was not for your faith undiminished by prison and suffering, your heroic hope [...]. The space under the quotation bears the Pope's facsimile signature and date he uttered those words on, namely 23 October 1978. It is worth noticing that this year we celebrate the 25th anniversary of Cardinal Stefan Wyszyński's death and the 50th anniversary of his release from prison.

An outline of the Jasna Góra Monastery under the text is to emphasize the role of the shrine in the history of Poland and life of the Holy Father and the Primate of the Millennium. The bands beneath their feet bear their Episcopal mottos, namely Totus Tuus - the motto of John Paul II and Soli Deo - the motto of Cardinal Stefan Wyszyński. A watermark depicts a papal coat of arms as one of the most distinctive emblems associated with John Paul II. Both sides of the note feature a theme of Peter's keys bound by a string.

The issue of the collector note to mark John Paul II has been scheduled for 16 October 2006, i.e. the anniversary of Karol Wojtyła's election to the papacy. The works on the banknote's design started in 2005. The design was examined by Archbishop Józef Kowalczyk, Apostolic Nuncio in Poland, Cardinal Józef Glemp, Primate of Poland, Archbishop Józef Michalik, Chairman of the Conference of the Polish Episcopate and Cardinal Stanisław Dziwisz, Metropolitan of Cracow. They approved the design.

An image of the Polish Pope has already twelve times been depicted on coins issued by the National Bank of Poland. 47 types of coins have been put into circulation since 1982. Pope's pilgrimages and pontificate jubilees were the most frequent impulses to issue new coins.