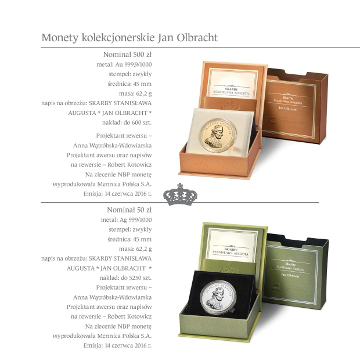 The tenth coin of the series portrays John Albert, the third son of Casimir Jagiellon, King of Poland from 1492, Duke of Głogów until 1498, ineffectively elected King of Hungary in 1490. His brief reign was difficult and tarnished by the defeat in Bukovina. During this period the Polish-Lithuanian personal union was suspended (the Grand Duke’s throne in Lithuania was taken over by his brother Alexander).

The medallic bust of the king in profile turned to the right (modelled on a portrait by Marcello Bacciarelli) bears a resemblance to the facial features sculpted on the Gothic-Renaissance tomb in Wawel Cathedral. On the medal, the king is shown wearing a kalpack with an ostrich feather; over his coat he is wearing a gold chain with a medallion.

The obverse of the coin reads in translation (a slightly abbreviated text taken from the reverse of the medal): Casimir’s third son, brother of Ladislas, King of Hungary and Bohemia, and of Saint Casimir, who defeated the Tartars and was defeated in battle by the Wallachians. Died in Toruń A.D. 1501 at the age of 41, in the 9th year of his reign, on 7 August.

John Albert, born in 1459, was the third son of Casimir Jagiellon and Elisabeth of Austria. He incorporated the Duchies of Zator and Płock into the Crown. In foreign policy he focused on fighting the Tartars and Turks, and on striving to regain Polish control over Moldova and Wallachia, Polish fiefs from 1387. The expedition of the levée en masse in 1497 ended in defeat in the battle of Koźmin in Bukovina, where approx. 5,000 Polish noblemen were killed (hence the saying, “In King Albert’s time the gentry died out”). The war was halted by the truce in 1501. To gain funds for the country’s defences from taxes, the nobility were granted new privileges (1496, the Piotrków Statutes). Important changes took place in the Polish parliamentary system – the former Privy Council was transformed into the Senate and the noblemen’s council conventions into the Chamber of Deputies of the Sejm. This lay the foundations of the so-called “noble democracy”. John Albert died without issue and was buried in Wawel. His heart was laid in Ss. Johns’ Cathedral in Toruń.