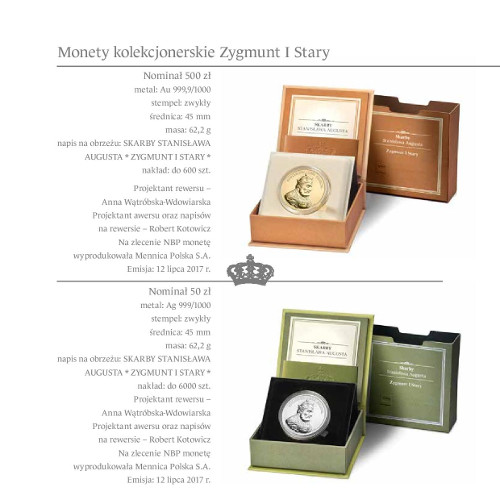 The twelfth coin in the series depicts Sigismund I, the fifth son of Casimir Jagiellon and Elisabeth of Austria. Sigismund became the Grand Duke of Lithuania and King of Poland in 1506. Following the coronation of his son in 1529, he was dubbed “the Elder”. A partisan of a peaceful solution to political conflicts, he enjoyed the respect of both his subjects and foreign rulers. His reign ushered Poland into its golden age – a period of economic and cultural prosperity.

The reverse of the coin depicts the bust of the king modelled on a medal designed after a painting by Marcello Bacciarelli. The bust faces right, the king is wearing a crown and has a short beard over a ruff. He is clad in armour covered with a richly embroidered coat clipped with a decorative buckle and adorned with a jewelled Order of the Golden Fleece on a chain. This is the first medal in a series struck by Jan Jakub Reichel, the new court medal minter of Stanisław August (his predecessor in this post, Jan Filip Holzhaeusser, died in 1792).

On the obverse of the coin we can read a slightly shortened version of the text engraved on the reverse of the medal (in translation): Casimir’s penultimate son, distinguished by sagacity, triumph and wealth, a contemporary and equal of Emperor Charles V and Francis I of France. Died AD 1548, aged 81, in the 42nd year of his reign, on 1 April.

Sigismund was born in 1467. He married Barbara Zapolya (1512) and, after her death, Bona Sforza d’Aragona (1518). In 1499–1506 he held the title of Prince of Głogów. Elected King of Poland in December 1506, Sigismund was crowned in Kraków in January 1507. He reorganised and strengthened the Treasury and ensured increased Crown revenue from duty collection and the salt works. In 1515, he concluded an alliance with the Habsburgs. In 1526, the king incorporated the fiefdom of Masovia into the Polish Crown. He carried out an election vivente rege of his son Sigismund Augustus in 1529, and soon afterwards established in Poland the election viritim (all noblemen being entitled to vote on the condition of presenting themselves at the election site). As a result of wars fought in 1507–1508 and 1512–1522 (and despite the victory at Orsza in 1514), Lithuania lost Smoleńsk to Muscovy. Following the war with the Teutonic Order (1519–1520), in 1525 Sigismund accepted the liege homage from Albrecht Hohenzollern, the Prince of Prussia (previously the Grand Master of the Teutonic Order). The king modernized the monetary system and integrated the Prussian coin into it in 1526. Sigismund was a generous patron of Renaissance art and remodelled Wawel Castle. He died in 1548 and was buried in Kraków on Wawel Hill.