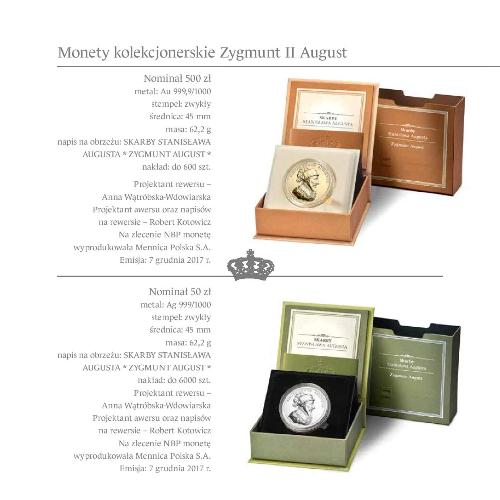 The thirteenth coin of the series depicts Sigismund-Augustus, the son of Sigismund the Elder and Bona Sforza d’Aragona, from 1529 the last independent Grand Duke of Lithuania, the King of Poland formally crowned in 1530 (vivente rege election of 1529) and reigning from 1548, following the death of his father. He was the last king from the male line of the Jagiellonian dynasty. He acquired Livonia as a fief and joined Poland and Lithuania in a union; he was distinguished by his tolerant attitude in matters of faith, he cared about the prestige of the state and was a patron of the arts.

The reverse of the coin presents the bust of the king transferred from a medal (based on a painting by Marcello Bacciarelli), in profile facing right, with a mustache and a split beard, in a Spanish costume – a small stiff hat with ostrich feathers, a ruff and a coat with an impressive sable fur collar, and a chain with the Order of the Golden Fleece on his neck.

The obverse of the coin carries a slightly shortened version of the text from the reverse of the medal (in translation): The only son of Sigismund the Elder and Bona Sforza, during his father’s life he was elected as king at the age of ten, after the death of his father he acquired Courland as a fief of the Commonwealth and he joined Lithuania and Poland in a lasting union, the last King of Poland from the Jagiellonian dynasty. He died childless in Knyszyn on the 18th of July Anno Domini 1572, at the age of 52, in the 24th year of his reign.

Sigismund-Augustus was born in 1520. He was married three times. In 1543, he married Elizabeth of Austria (died in 1545). In 1547, he married Barbara Radziwiłł (crowned in 1550, died in 1551) against the will of his parents and of the Polish Sejm. In 1553, Sigismund-Augustus married Catherine of Austria (they separated in 1563, she died in 1572). As a result of wars with Russia, in 1561 he acquired Livonia as a fief of the Kingdom of Poland, along with the secular Duchy of Courland and Semigallia established there and ruled by Duke Gotthard Kettler, the last Master of the Livonian Order of Knights. He began the development of the Polish fleet. He carried out many economic and military reforms, and the survey and so-called recovery of property – estates previously given to magnates were restored to the state treasury. The most important political act during his reign was the Union of Lublin signed in 1569. It resulted in the establishment of the Polish-Lithuanian Commonwealth, also known as the Commonwealth of Both Nations – from that point on Poland and Lithuania had a single ruler, a common foreign policy, a common Sejm and a single currency, while retaining separate laws, treasuries, offices and armies. The King died childless in 1572 in Knyszyn and was buried in a solemn ceremony at Wawel Castle.