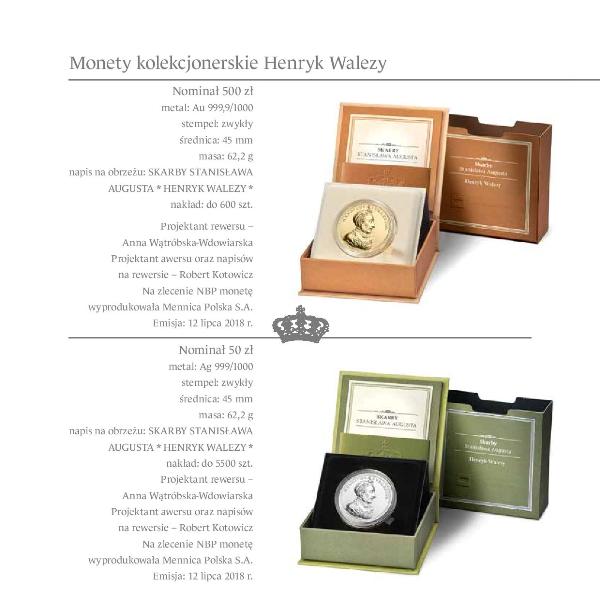 The fourteenth coin in the series depicts Henry Valois. Born in 1551, he was the fourth son of the French King Henry II and Catherine de Medici, and the last French monarch of the Valois dynasty. He was the first elected monarch of the Polish-Lithuanian Commonwealth. Valois was elected in May 1573 following the heirless death of the last king from the Jagiellonian dynasty Sigismund II Augustus. He arrived in Poland at the end of January 1574, and his coronation took place at the Wawel cathedral on 21 February. After learning of the death of his brother Charles IX, who was the King of France, he left Poland on the night of 18-19 June 1574. He was crowned the King of France as Henry III in 1575 in Reims.

On the reverse the coin depicts the bust of the king transferred from a medal (according to a painting by Marcello Bacciarelli) with the profile facing right, in a velvet hat with ostrich feathers and a brooch pinned above the forehead, with a curled mustache and a small beard, with an earring in his right ear; in a decorative French robe with a lace collar, in a coat and with the Order of Saint Michael on a ribbon.

The obverse of the coin carries a slightly shortened version of the text from the reverse of the medal (in translation): The third son of the French King Henry II, elected Anno Domini 1573, crowned on the 21st day of February Anno Domini 1574, after only five months in Poland he left for France in order to take the throne of that kingdom, orphaned after the death of his brother – Charles IX. He was murdered on the 2nd day of August Anno Domini 1589, at the age of 38.

During the bloody religious war taking place in France, Henry Valois won the first Polish free election, even though he didn’t know the institutional system and the politics of the Polish-Lithuanian Commonwealth and wasn’t interested in them. He swore to abide by the legal acts prepared by the Election Sejm. These were the so- called Henrician Articles, which regulated the principles of the king’s reign (and guaranteed the basic rights of the nobility), the provisions of the Warsaw Confederation which guaranteed religious tolerance, and the pacta conventa – the personal pledges of the ruler regarding politics, the economy and culture. Henry Valois was widely criticized for his profligacy and promiscuous lifestyle. He failed to fulfill his promise to marry Infanta Anna Jagiellon, the sister of Sigismund II Augustus. A year after his departure from Poland, in June 1575, a state of interregnum was proclaimed in Poland and the nobility chose Anna Jagiellon as his successor. Despite that, Henry III continued to use the titles of the King of France and the King of Poland until the end of his life. He was stabbed to death during religious feuds in 1589. His grave is located in the Basilica of Saint Denis in Paris.