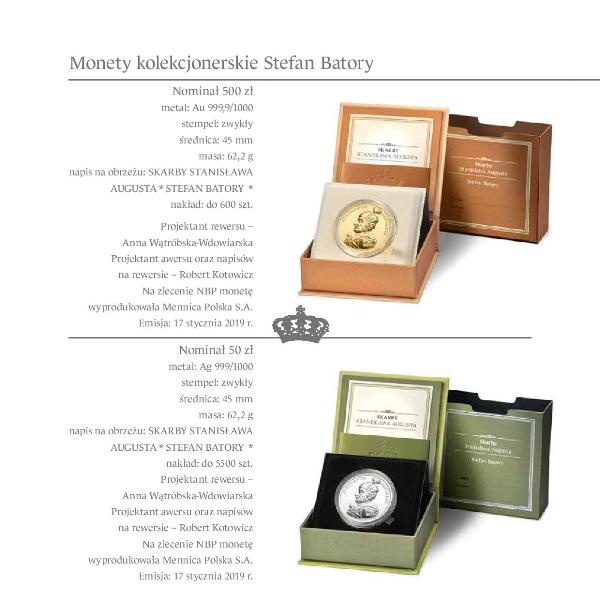 The fifteenth coin of the series carries the image of Stephen Bathory (Báthory István), the son of the Voivode of Transylvania and Prince of Transylvania from 1571, acclaimed King of Poland by the noblemen in December 1575. On 1 May 1576, he married Anna Jagiellon, who had been elected King of Poland a year before, whereby he acquired the right to the throne and was crowned in Kraków. He is regarded as one of the most outstanding Polish rulers.

The reverse of the coin features the king’s bust modelled on a medal (designed after a painting by Marcello Bacciarelli). The bust faces left, the king has a moustache, and is wearing a traditional Hungarian woollen cap decorated with feathers, a zhupan, and a delia cloak with a fur collar and buttons, clasped with a round fibula.

The obverse of the coin features a slightly shortened version of the text engraved on the reverse of the medal (in translation): Prince of Transylvania, spouse of Princess Anna Jagiellon, elected king A.D. 1575 on the 15th day of December, crowned the following year on the 30th day of May; forced the residents of Gdańsk into submission, militarily reincorporated Polotsk, Vitebsk, and Livonia into the Republic of Poland, established tribunals, founded the Academy of Vilnius; just, valiant, educated, snatched by untimely death A.D. 1586 in Grodno, at the age of 54, in the 11th year of his reign, on the 12th day of December.

Stephen Bathory was born in 1533. He received a thorough education in Austria at the Habsburg court, and in Italy. In Hungary, he was involved in fighting the Turks and Habsburgs, who were occupying the country. As the ruler of Poland, he strived to strenghthen the king’s power. Having come to the throne, he forced the supporters of emperor Maximilian II Habsburg, who was running against him for king, into submission. In 1577, he defeated the mercenary troops of Gdańsk, which had opted for the Habsburg. Gdańsk, however, maintained complete autonomy for the price of accepting the election result and awarding the king half of the fees imposed on ships and goods entering the port (mooring fee). Bathory made a particular contribution in the military field. He organised, amongst others, the Peasant Infantry. He conducted victorious campaigns against Moscow, conquering Polotsk and Velikiye Luki. The Truce of Yam-Zapolsky in 1582 strengthened the rule of the Republic of Poland in Livonia and expanded the borders of Lithuania. He planned to create an anti-Turkish league based on cooperation between European states in order to liberate Hungary. In domestic policy, he improved the tax system and set up new mints. He also established further Tribunals – the Crown Tribunal (1578) and the Lithuanian Tribunal (1581). In 1579, he founded the Academy of Vilnius. He was tolerant of religious beliefs. He died in 1586 and was buried on Wawel Hill, where his tombstone by Santi Gucci is placed in St Mary’s Chapel.