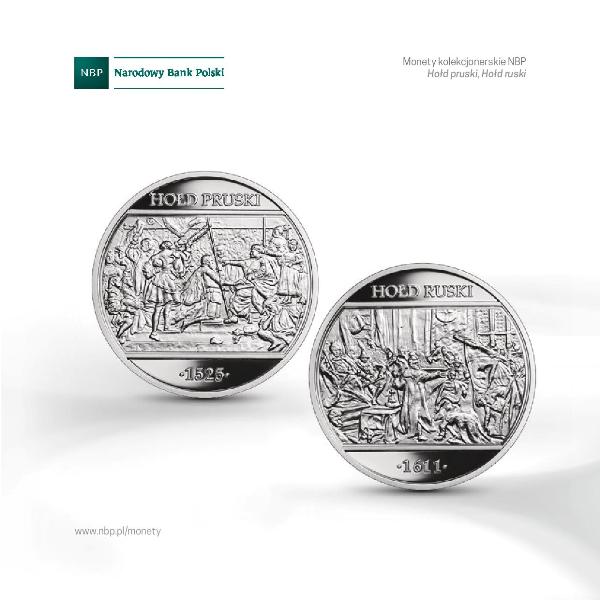 For several generations, the historical imagination of Poles has been dominated by Jan Matejko (1838-1893) and his painterly visions. Only today, in the era of computer graphics and virtual reality, is the influence of Matejko slightly fading, but his work continues to be an important reference point for those Poles who still take an interest in history. The coins commemorating “the Prussian Homage, the Russian Homage” are intended as a reminder of Matejko’s vision of history, but also landmarks in the history of Poland. In the work of Master Jan, the motif of Polish victories over the states which were to subsequently partition the country had been present since his first, still juvenile paintings. Already in 1853, he created a small easel painting, Shuysky Tsars before Sigismund Vasa, recalling Moscow’s defeat in the war with Poland in the early 17th century. Later he created monumental canvases praising the glory of the former Republic and its victories over the Russian and German forces – Stephen Bathory at Psków (1872) and The Battle of Grunwald (1878). Later still, Matejko planned to paint two pictures with the common motif of a foreign monarch on his knees, in a gesture of tribute to a Polish king. In 1882, he finished The Prussian Homage, depicting the feudal oath made by the Prussian Duke Albrecht Hohenzollern to Sigismund the Elder in Cracow in 1525. Ten years later, Matejko made plans for another large historical painting presenting the homage paid to Sigismund Vasa by the captured Moscow Tsar Vasili Shuysky and his two brothers, which took place in Warsaw in 1611. As part of this plan, he created a small-sized easel painting, Shuysky Tsars at the Warsaw Sejm 1611, a sketch of the panoramic work planned by Master Jan. Regrettably, Matejko did not make it to complete the painting and posterity was left with just the sketch, which was soon to become widely known and famous under the colloquial name coined by the Polish audience – The Russian Homage. The name clearly alluded to The Prussian Homage and created a connection between the two paintings, at the same time giving rise to some terminological confusion. In former Poland, the adjective “Russian” was used to describe phenomena associated with the heritage of Kiev Ruthenia, but existing within the borders of Poland. The state of the Tsars was called Moscow, so it would be adequate to use the name “the Muscovite Homage”. In the 19th century, however, these terms were understood differently, and the ruler of Russia was called the Russian Tsar. This is why the name “The Russian Homage” was engraved in people’s memory. An additional link between the paintings were the figures of two Sigismunds – a grandfather and a grandson – symbolising the depicted triumphs.