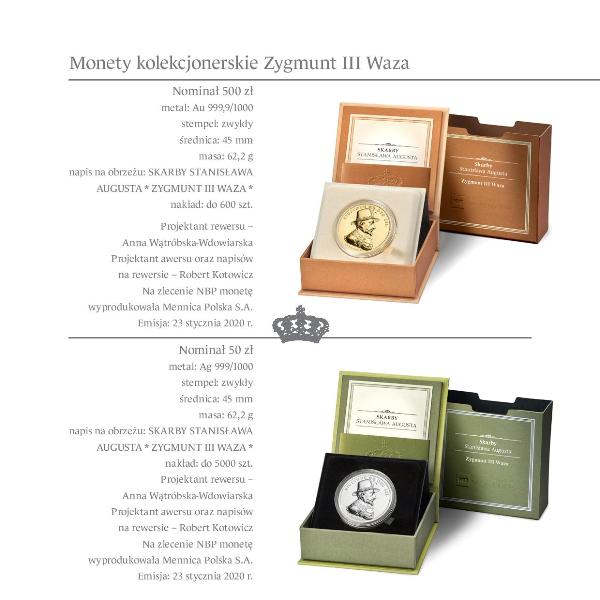 The reverse of the coin features the bust of the king transferred from a medal (according to a painting by Marcello Bacciarelli) with the profile facing right, with a mustache and a small beard, in a high hat with a jewelled feather brooch, in a large lace collar, wearing a caftan with studs and an embroidered coat, and with the Order of the Golden Fleece on a chain.

The obverse of the coin carries a slightly shortened version of the text from the reverse of the medal (in translation): The son of the Swedish King John, the grandson of Sigismund the Elder by his mother Catherine, elected on the 19th day of August Anno Domini 1587, having captured Maximilian of Austria, his rival to the throne, and crowned on the 27th day of December, he forfeited the Swedish kingdom because of his adherence to the Catholic faith. During his reign, Poland’s neighbouring enemies were vanquished many a time, Smoleńsk was seized by the king’s army, a commendable peace treaty was signed with the Turks and civil wars were suppressed. He died in Warsaw, at the castle he had renovated, on the 30th day of April Anno Domini 1632, at the age of 66, in the 45th year of his reign.

Sigismund Vasa was born in 1566 in Sweden, at the castle in Gripsholm, where his parents were imprisoned until 1567. Brought up by the Jesuits, the young prince became a devout Catholic, averse to the heretics. His opponents included Jan Zamoyski, a great humanist of the epoch. Sigismund’s claim to the Swedish crown after losing it in 1599 led to long-lasting wars. Equally unpopular in the Commonwealth of Poland, his pro-Habsburg policy led to conflicts with Turkey, while the armed intervention in Moscow (the so-called Dymitriads and the brief enthronement of his son Ladislas on the Tsars’ throne) ended in failure. Sigismund was married twice – to Anna Habsburg and Constantia Habsburg, and fathered six children, among whom were the subsequent Polish kings, Ladislas and John Casimir. The king moved his residence to Warsaw and earned a reputation for being an outstanding patron and protector of the arts in the time of Mannerism and Early Baroque. He died in Warsaw in 1632, and was buried in Wawel Cathedral.