100th Anniversary of the Birth of Saint John Paul II 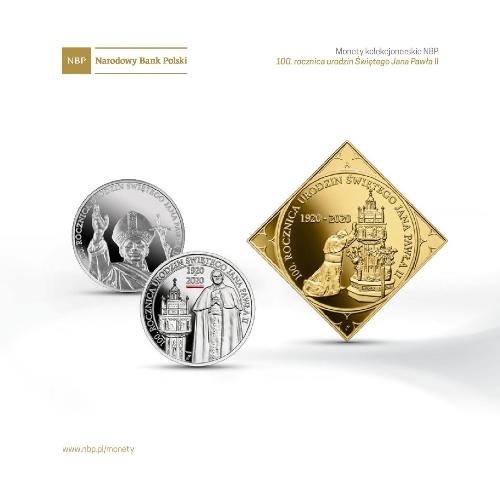 Karol Józef Wojtyła, Pope John Paul II, was born on 18 May 1920 in Wadowice. Those were particularly hard times in Polish history. Shortly after regaining independence in 1918, Poland faced the threat of losing it again as a result of the Bolsheviks’ invasion. Referring to these circumstances, John Paul II said: “You know that I was born in May 1920, at the time when the Bolsheviks marched towards Warsaw. And that is why since my birth I have owed a great debt to those who at that time took up the fight against the invader and won, paying with their lives.”

His youth was marked by World War II (1939-1945) and the German occupation of the country. He wrote this: “I was spared a lot of suffering in this huge and terrible theatre of the Second World War. This is because any day I could have been snatched from the street, from the quarry or from the factory and transported to the camp. Sometimes I even asked myself, so many of my peers were killed, why not me? Today, I know it was not a coincidence.”

In 1946 Karol Wojtyła was ordained as a priest, in 1958 he was appointed bishop, in 1964 Archbishop of Cracow, and in 1967 a cardinal. On 16 October 1978, he was elected to the See of Peter. The Pontificate of John Paul II was one of the longest and most prolific. In a crisis of values and moral confusion, he tirelessly taught that the shaken ethical, social and political order can only be restored by bringing together justice and forgiveness, which are pillars of true peace.

On 2 April 2005, John Paul II departed to the House of the Father. On 1 May 2011, Pope Benedict XVI beatified him, and on 27 April 2014, Pope Francis, by the act of canonization, included him among the saints of the Catholic Church.

When declaring the year 2020 the Year of Saint John Paul II, the Sejm of the Republic of Poland stated: “He was and still is a guiding light for us to walk with confidence into the future. His deeds demonstrated extraordinary courage.”

The obverse of the gold coin depicts a fragment of Jerzy Kossak’s painting “Miracle on the Vistula”, whereas the reverse shows Saint John Paul II praying at the baptismal font in the Basilica of the Presentation of the Blessed Virgin Mary in Wadowice.

The obverse of the silver coin (with a high relief) shows the façade of the Basilica of the Presentation of the Blessed Virgin Mary in Wadowice and the sundial located on the wall of the church in Wadowice with the inscription “CZAS UCIEKA WIECZNOŚĆ CZEKA” [Time flies, eternity waits]. The reverse of the coin depicts Saint John Paul II with a pastoral staff.

The obverse of the silver coin depicts a fragment of Jerzy Kossak’s painting “Miracle on the Vistula”, whereas the reverse shows Saint John Paul II and an image of the baptismal font in the Basilica of the Presentation of the Blessed Virgin Mary in Wadowice.