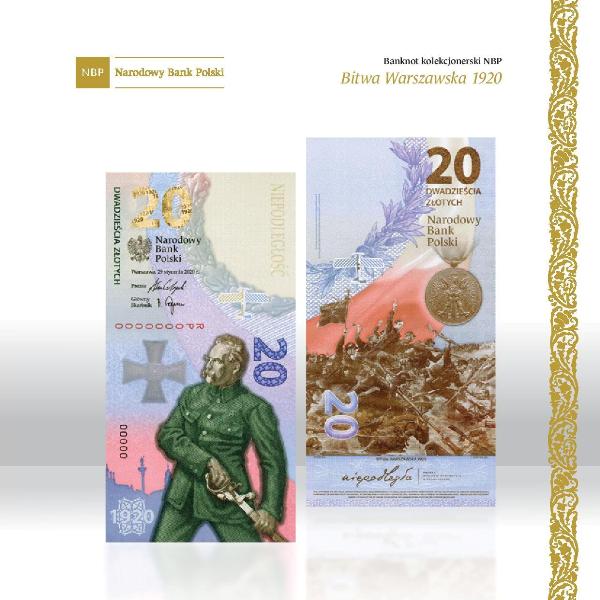 On the 100th anniversary of the memorable Polish victory over the Bolsheviks in the Battle of Warsaw, Narodowy Bank Polski issued a commemorative collector banknote designed in a vertical layout.

The front of the banknote depicts Józef Piłsudski. The image is based on the painting “The Year 1920” by Kazimierz Mańkowski. The Chief of State is presented as the defender of Warsaw. The city skyline is visible in the background. The neigbouring image of the obverse of the Cross of Valour with the Polish eagle, the inscription “Na polu chwały” (”On the field of glory”) and the date 1920 are a joint reference to the collective war effort by the Polish soldiers and to the moment when this decoration was established at the climax of the fighting on the outskirts of Warsaw. The front of the note is complemented by the inscription NIEPODLEGŁOŚĆ (Independence) surrounded by the wreath of oak leaves and the graphic elements and plant motifs originally featured on the 100 Polish mark note from 1919, including the image of the eagle and the monogram “RP”.

The back of the note presents the central fragment of Jerzy Kossak’s painting ”The Miracle on the Vistula” under the Polish national colours. It depicts a symbolic scene of chaplain Ignacy Skorupka leading soldiers of the volunteer military formations to attack. The whole is complemented by a wreath of laurel leaves, the Commemorative Medal for the War of 1918–1921 (erratum to the banknote cover) and a fragment of the public appeal titled “Homeland in danger” issued by the Government of National Defence on 5 August 1920.

The Battle of Warsaw was a decisive episode of the war against the Bolsheviks. The Polish victory was dubbed ”the miracle on the Vistula”, and many in the country ascribed the unlikely success in the battle to the protection of Holy Virgin Mary, the feast of whose Assumption coincided with the height of the battle. In terms of command and military tactics merits should go to Commander-in-Chief Józef Piłsudski, Chief of Staff Tadeusz Rozwadowski and generals: Władysław Sikorski – the commanding officer of the 5th Army, Józef Haller – the commanding officer of the Volunteer Army, which fought on the outskirts of Warsaw, and Maxime Weygand. The victory was possible thanks to the whole nation joining forces and to the effort of the Polish soldiers who resolutely opposed the Bolshevik onslaught. Military formations composed of volunteers who responded to the public appeal ”Homeland in danger”, many of them secondary school and university students, distinguished themselves in battle. The popular imagination of the time was captured by a modest priest Ignacy Skorupka who is remembered for his gallant action and death on the field of honour. He has been portrayed in innumerable paintings and in legend leading soldiers to battle with the Cross in his hand. Skorupka epitomised the figure of the defender of Western civilisation and Christianity against the devastating Bolshevik revolution.

Fierce clashes along the fortification line surrounding Warsaw near Radzymin and Ossów in mid-August 1920 became legendary. From a military perspective equally important were the battles of the Northern Front and on the Wkra river supporting the subsequent decisive strike from the south led from the Wieprz river. Polish radio intelligence and its achievements played a no mean role too.

The Warsaw Victory has greatly strengthened the aura of Józef Piłsudski as the reviver of the Polish state and a victorious commander. He created the general concept of the battle and led the decisive attack from the Wieprz. And momentous victory it was! Even the contemporaries realized its significance, with Edgar Vincent D’Abernon calling the Battle of Warsaw ”the eighteenth decisive battle of the world”. On the outskirts of Warsaw not only was Poland’s independence saved, but the expansion of Bolshevism across Europe was brought to a halt as well.