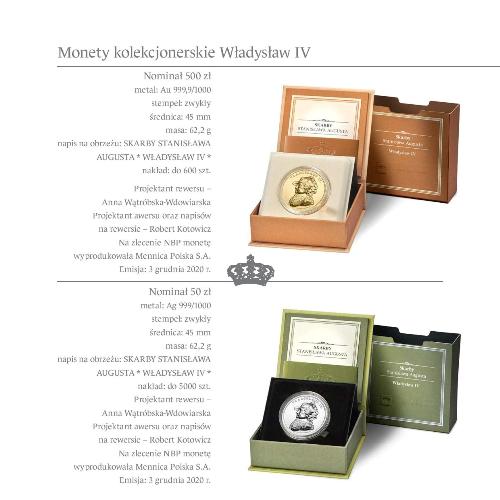 Ladislas Vasa was born in 1595 in Łobzów. Carefully educated, as an efficient commander he waged many wars with Russia, Turkey and Sweden, usually obtaining favourable peace conditions. In domestic policy, with the country’s good economic situation, he regulated religious issues, reorganised the army and created a Polish war fleet. He founded Władysławowo and Kazimierzowo fortresses. He obtained the Duchy of Opole and Racibórz as pledge (until 1666), and in the course of suppressing the Cossack uprisings in Ukraine, he led to so-called golden peace (1638–1648), broken after the king’s death by the Chmielnicki uprising. Ladislas IV also went down in history as a patron of science and fine arts, a lover of theater and opera. He erected the King Sigismund’s Column in honour of his father. Married twice (with Cecilia Renata of Austria and from 1646 – with Marie Louise Gonzaga), he did not have adult offspring. He died in Merecz (now Merkine), Lithuania in 1648 and was burried at Wawel, while his heart was laid in the Vilnius cathedral.