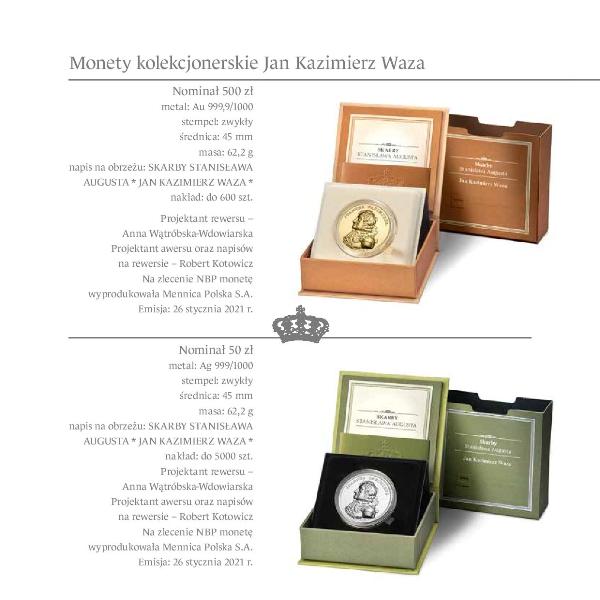 The eighteenth coin of the series features John Casimir of the Vasa dynasty, son of Sigismund III, King of Poland and Sweden, and Constance Habsburg of Austria, half-brother of Ladislas IV. John Casimir was elected to the Polish throne in November 1648 and received the crown in Kraków in January 1649. Appointed Cardinal in 1646, he had resigned from the position before he was elected king. In 1660, he renounced his rights to the Swedish throne and remained only the titular King of Sweden. The turbulent reign of John Casimir came to an end when he abdicated in 1668 and retired to France. He is held in bad repute that has not been improved by the recognition of his military talents.

John Casimir Vasa was born in Kraków in 1609. Drilled in the art of war in his youth, as a king he faced Bohdan Khmelnytsky’s insurrection, then battled against Russia, and despite his great victory at Beresteczko (1651) lost the Ukrainian lands on the Dnieper River to Russia (1654). The Swedish invasion in 1655 and the alliance made by part of the crown nobility with Swedes brought about a massive destruction of the country. Numerous battles led by the king, and in particular the defense of the monastery of Jasna Góra, lifted the nation’s spirit and the war was concluded with the signing of the Truce of Oliwa (1660). It was then that the Duchy of Prussia was granted sovereignty under the Treaties of Welawa and Bydgoszcz. The following years saw continued fighting with Russia and the lost civil war with Hetman Lubomirski. The attempts to introduce state reforms failed. Faced with so much adversity, after the death of his wife Marie Louise de Gonzague and his two infant children, John Casimir renounced his right to the throne in 1668 and retired to France, where he served as the Abbot of the Benedictine Abbey of Saint-Germain-des-Prés. He died in Paris in 1672 and was buried in Wawel Cathedral. His heart was committed to a beautiful tomb in the Saint-Germain-des-Prés church in Paris.