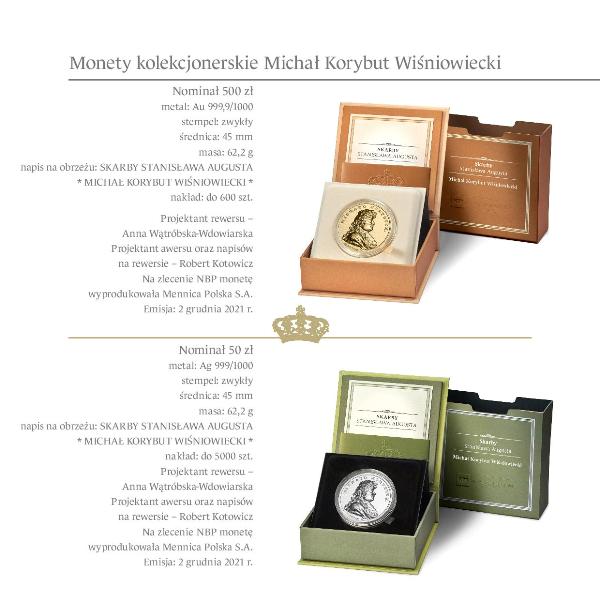 The nineteenth coin of the series depicts Michał Korybut Wiśniowiecki, of Korybut coat of arms, the son of the Ruthenian Voivode Prince Jeremi and Gryzelda, née Zamoyska. By the votes of the gentry, who wanted a local for the throne, he was elected king of Poland against several foreign contenders, and crowned in Cracow on 29 September 1669. He was considered an inept ruler, dependent on the magnates and his reign was marked by internal factional fighting. Duke Jeremi (Jarema) and King Michał are immortalised in The Trilogy novel by Henryk Sienkiewicz.

The reverse of the coin features the bust of the king (based on a painting by Marcello Bacciarelli) transferred from the medal, in profile to the right, wearing a wig en crinière de lion, with a faint moustache, a jabot and a coat decorated with floral patterns, with the Order of the Golden Fleece on the ribbon. On the obverse of the coin we read the text from the reverse of the medal (in translation): From the Wiśniowiecki family, related to the Jagiellonians, the son of Jeremi, the hero, and Gryzelda Zamoyska, against his own will and hope elected king Anno Domini 1669, on June 19, troubled by the worries of a short reign and the hatred of jealous people, died in Lviv Anno Domini 1673, aged 34, in the fourth year of the reign, on November 11.

Michał Tomasz was born in 1640 in Bialy Kamień in western Ukraine, in the Wiśniowiecki princely family. He was educated at Jesuit schools and university in Prague. He learned etiquette at the court of John Casimir Vasa, and later at courts in Dresden and Vienna. He spoke many languages. In 1670 he married Eleonora Habsburg, the daughter of the Emperor Ferdinand III and the sister of the Emperor Leopold I. In the country, two factions were in conflict: the pro-French, so-called malcontents, to which Hetman John Sobieski belonged, and the Royalists, to which Stefan Czarniecki belonged. Most sejms (parliament sessions) were broken off. In 1672, the old treaties with Brandenburg were renewed, abolishing the fief dependence of the Prussian dukes on Poland. In the same year, the Turkish invasion and the loss of Kamieniec Podolski led to the conclusion of the unfavourable treaty of Buczacz, on the strength of which the Poles had to pay a tribute to Turkey. In the following year, a conciliatory sejm was held, and an expedition against Turkey was launched under the king’s command, but due to his sudden illness John Sobieski succesfully took over command.

The king died childless in 1673 in Lwów; his heart was placed in the Camaldolese monastery in the Bielany district in Warsaw, and his body was buried together with the ashes of John II Casimir Vasa at Wawel in 1676.