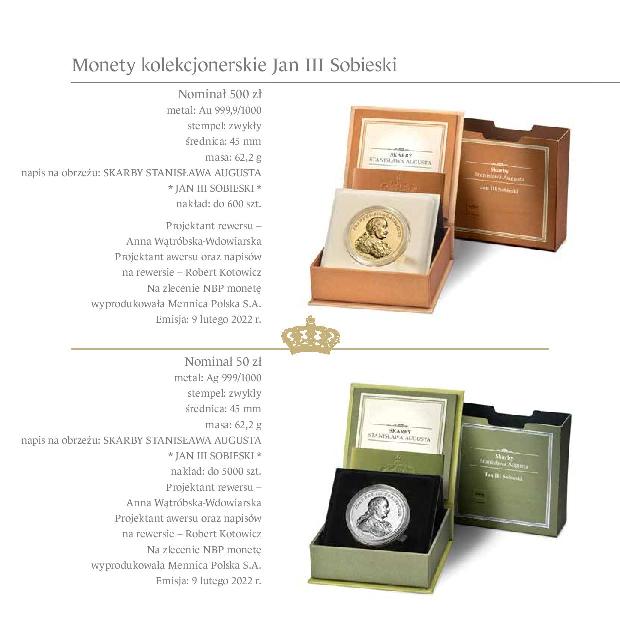 The twentieth coin of the series shows John III Sobieski of the Janina coat of arms, the Grand Hetman of the Crown, elected king after the victory of Chocim in May 1674 and crowned on 2 February 1676. He gained fame in Europe after the victory at Vienna and is considered one of the greatest commanders and rulers in the history of Poland. He had reform plans regarding foreign and domestic policy and he wanted to secure the succession of his eldest son James (Jakub) to the Polish throne.

The reverse of the coin features a bust of the king (according to a painting by Marcello Bacciarelli), transferred from a medal, facing right, with Sarmatian-style shaved hair and abundant moustache, in a laurel wreath; in armour with a lion epaulette and a fur-lined cloak, with the cross and star of the French Order of the Holy Spirit. On the obverse of the coin, the text from the reverse of the medal (in translation, slightly shortened) reads: Elected on the 20th day of May Anno Domini 1674, crowned on the 2nd day of February Anno Domini 1676 – as a subject [of King Michał Korybut Wiśniowiecki], he beat the Turks at Chocim, as king he defeated them, freed Vienna from the siege – distinguished for his valour, learning and eloquence – as a subject he took part in internal disturbances, on becoming king he was tormented by the same misfortune. He died in Wilanów Anno Domini 1696, at the age of 72, in the 22nd year of his reign, on the 17th of June.

John Sobieski, the son of James (Jakub), the castellan of Kraków, and Zofia Teofila née Daniłowicz, was born in 1629 in Olesko, in Red Ruthenia. He was thoroughly educated. After studying at the Academy of Kraków and completing the Grand Tour, he took up military service in the country, fighting against Cossack leader Khmelnytsky and the Russians. In 1655, he surrendered to the Swedes, but in 1656 he returned under orders of Polish commanders and took part in numerous wars with the Russians, Cossacks, Tatars and the Turks. In 1668, he became the Grand Hetman of the Crown. At that time, he also gained the reputation of a hero and was dubbed the “Lion of Lechistan”, in particular due to the victory at Chocim (1673). He was in favour of an alliance with France, he made plans to regain Ducal Prussia and strengthen Poland’s presence on the Baltic Sea. In the spring of 1683, he signed a treaty with Austria and, as commander-in-chief, achieved a great and famous victory over the Turkish army of Kara Mustafa, which had been besieging Vienna. The following years brought an unfavorable peace with Russia (1686), unsuccessful expeditions to Moldavia and troublesome struggles with the opposition from the Polish magnates. He married Marie Casimire de la Grange ďArquien (to whom he fondly referred as “Marysieńka” /Little Mary/), and had eight children with her. In addition to political talents, he also showed a passion for fine arts and literature, supported architects, painters and sculptors, as well as scientists (astronomer Johannes Hevelius called the newly discovered constellation Sobieski’s Shield). He built a palace and a garden in Wilanów. He died in 1696. He was first buried in the Capuchin Church in Warsaw, and then, in 1734, at Wawel Castle.