The most expensive coin 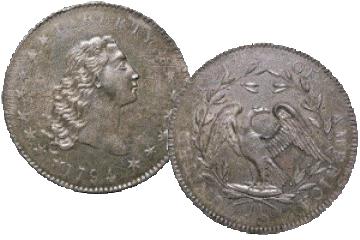 What may be America's oldest silver dollar has become the world's most expensive coin, with its owner saying it changed hands in a private transaction between coin collectors for nearly $8 million. Steven L. Contursi, who has owned the mint-condition 1794 Liberty dollar for the past seven years, confirmed Thursday that he sold it to the Cardinal Collection Educational Foundation of California for $7.85 million. The previous record price paid for a coin was $7.59 million for a U.S.- minted 1933 $20 gold piece, according to the American Numismatic Association. The U.S. began producing silver dollars in 1794, and this particular one remains in near-perfect condition 216 years later. That being the case, the price it fetched was not surprising, said professional coin grader David Hall. "Even if it looks like it's been run over by a truck it would still be worth a hundred grand," he said. Part of the so-called flowing-hair silver dollars, the coin has a portrait of Lady Liberty with long, straight hair on the front and a noticeably skinny American eagle on the back. "That's the type of piece that is available maybe once in a lifetime," said Martin Logies, curator of the Cardinal Collection, a non-profit dedicated to preserving rare coins and educating the public about them. He said the foundation plans to put the coin on display, just as Contursi did much of the time he owned it. Numismatic experts say it was among the first U.S. silver dollars ever made. "From the research I've done, it is unquestionably the earliest struck of all the pieces known to remain in existence," said Logies, author of "The Flowing Hair Silver Dollars of 1794." Of the approximately 1,750 such dollars produced that year, only about 150 are known to exist. The quality of the imprint on this one shows it was struck on a hand-cranked press from a special piece of polished, high-quality silver. That indicates it was intended for either a dignitary or the mint's own private collection, said Larry Shepherd, executive director of the American Numismatic Association. It likely remained in the mint's collection until the 1800s, Shepherd said, when it was probably traded to a private collector, something he said the mint sometimes did in those days. Contursi, who runs California-based Rare Coin Wholesalers, acquired it for an undisclosed sum in 2003. He said he wasn't looking to sell it until Logies approached him. The Cardinal Collection curator had been one of a handful of experts Contursi had allowed to examine the coin after he bought it. He joked that Logies had had his eye on it ever since. "He just finally made me an offer I couldn't refuse," he laughed.