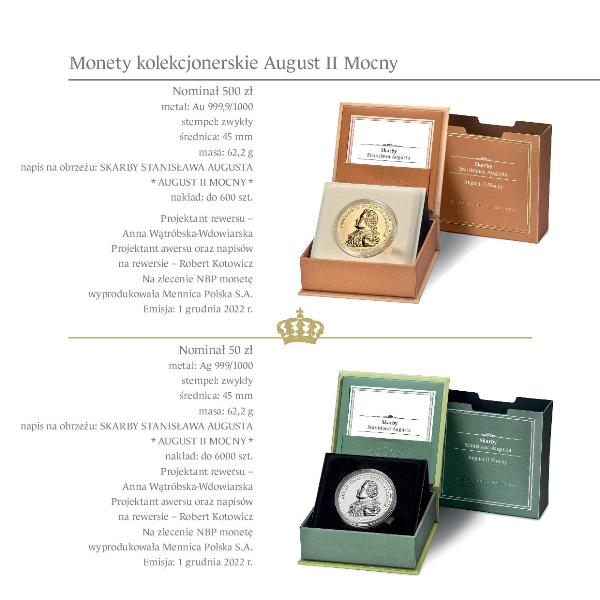 The twenty first coin of the series shows Augustus II the Strong of the Wettin dynasty, Elector of Saxony from 1694 (as Frederick Augustus I), elected King of Poland on 27 June 1697 and crowned on 15 September 1697. As an elector he engaged in 1700 in the Great Northern War and as a result of military defeat in 1706 yielded the crown over to Stanisław Leszczyński, who was supported by Sweden. Following the defeat of King Charles XII in the battle of Poltava in 1709, Augustus regained the Polish throne with the support of Russia.

The reverse of the coin features a bust of the king transferred from a medal (according to a painting by Marcello Bacciarelli), with the profile facing left, in a wig with a queue, wearing a stock tie with a small jabot fastened with a pin, dressed in a cuirass and a tailcoat with frogged lapels adorned with the star and ribbon of the Order of the White Eagle, and the Order of the Golden Fleece on a ribbon.

On the obverse of the coin, the text from the reverse of the medal (in translation) reads: Elected on the 27th day of June Anno Domini 1697, crowned on the 15th day of September. Under the Treaty of Karlowitz he regained Kamieniec Podolski, which had been captured by the Turks; driven out of the kingdom by the Swedish king Charles XII, he returned to the homeland Anno Domini 1709. He died in Warsaw on the 1st day of February Anno Domini 1733, at the age of 63, in the 36th year of his reign.

Frederick Augustus I, a son of Elector of Saxony Johann Georg III and Anne Sophie of Denmark, was born in 1670 in Dresden. He received a courtly education and went on a two-year grand tour. To assume the Polish throne, he converted to Catholicism and took the name of Augustus II. His wife Christiane Eberhardine of Brandenburg-Bayreuth would not renounce her Lutheran faith, therefore she was not crowned queen. Augustus II had a single legitimate son, Frederick Augustus II, who later became Polish king Augustus III. Augustus II led a reveller’s lifestyle and had numerous love affairs (with Countess of Cosel, among others), begetting several illegitimate children. Augustus II was a supporter of absolute power, which he wielded in Saxony, sparking strong conflicts with the Polish nobility, which established antiroyal confederations. The king found an ally in Tsar Peter I, who maintained his troops in Poland until as late as 1717, i.e. until the so-called Silent Sejm. While in Saxony Augustus II carried out numerous political and economic reforms, Poland was engulfed in a power crisis and the country lost the status of a strong state.

The king’s legacy includes the Saxon Palace in Warsaw, a part of the urban planning concept known as the Saxon Axis. He founded the Order of the White Eagle, the highest Polish decoration until today. He died in Warsaw in 1733. He was buried in Wawel, but his entrails are interred in the Capuchin Friars Church in Warsaw, and his heart in the Catholic Church in Dresden.