Image of Our Lady of Częstochowa [20] 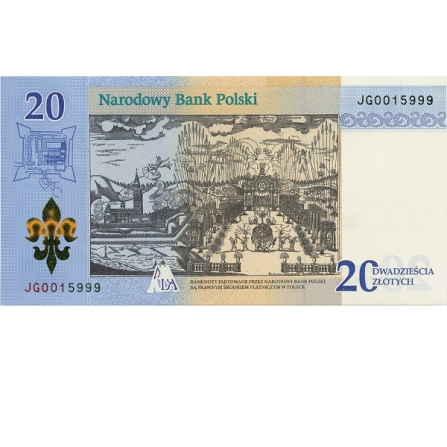 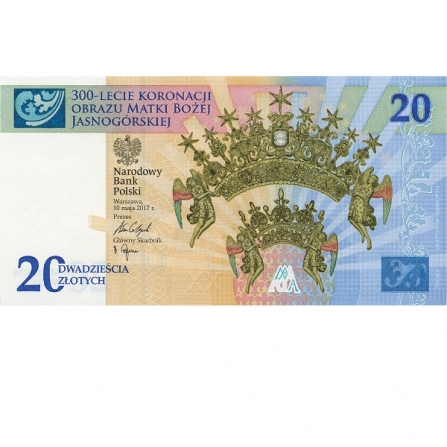 Face value: 20 pln
Dimensions: 150 x 77 mm
Mintage: 55000 pcs
Date of issue: 2017-08-21
Issue price: 60 pln
Designer: Justyna Kopecka
On the back side of the banknote we see a drawing published in Rome in 1717, depicting the coronation of the Miraculous Icon of the Mother of God — the illumination of the sanctuary and a view of the coronation altar. On the left we see the plan of the Jasna Gora monastery with its fortifications, and below it, the fleur-de-lis of the House of Anjou. On the right there is a floral motif from the frame of the Icon and a watermark — the coat of arms of the Pauline Fathers. The theological and historical symbolism presented on the banknote highlights the unique role that the Icon of Our Lady of Czestochowa, and more broadly the Marian cult in general, played in the history of the Polish nation.
The front side of the banknote dedicated to the 300th anniversary of this event shows the graphical depiction of the crowns bestowed by Pope Clement XI (which were stolen in 1909). The Marian crown is topped with stars which allude to the Woman of the Apocalypse. The crowns of Mary and Child Jesus are supported by pairs of angels/Ibis is associated with the cult of the Guardian Angels, promoted by the Pauline Fathers at Jasna Gore since the seventeenth century. Under the crown of Child Jesus, against the background of stylized Anjou lilies there is a Marian monogram, used as one of the banknote's security features, the so-called see-through register (recto-verso). On the right, there are stylized motifs of tendrils from the baroque frame of the Miraculous Icon. The watermark depicts the coat of arms of the Pauline Order showing a raven with a loaf of bread in its beak and two lions leaning against a palm tree. This imagery relates to the life of Saint Paul the First Hermit, the patron of the Pauline Order. In the upper-left corner there is a floral motif from the antepen-dium of the altar in the Chapel of the Mother of God, made on the occasion of the coronation. 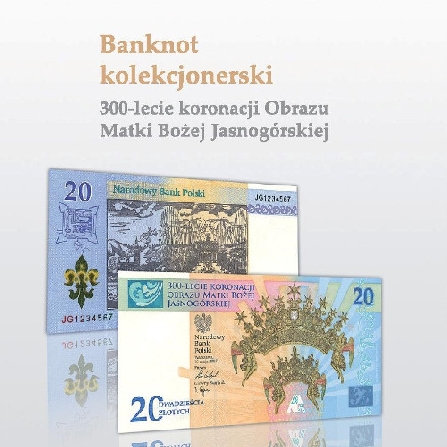 The Blessed Virgin Mary has long had a special status in the Polish people - she is the Mother, the Protector, and the Queen. Jan Dlugosz recognized this in the "Chronicles of the Famous Kingdom of Poland", calling the Mother of God "the most venerable Queen of the world and ours". Over the centuries many Polish rulers prayed for the intercession of the Blessed Virgin Mary before her Miracu¬lous Icon, and Jasna Gora became a pilgrimage destination for people from all strata of society, who brought gifts in the form of regalia to the Mother of God. The Marian cult was expressed and develo¬ped in the oath made by King John Casimir Vasa in the Lwow (Lvov) cathedral during the Swedish Deluge. The Lwow Oath was followed by the canonical coronation of the Miraculous Icon of ...