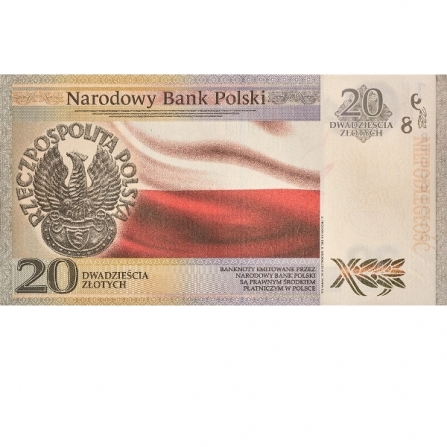 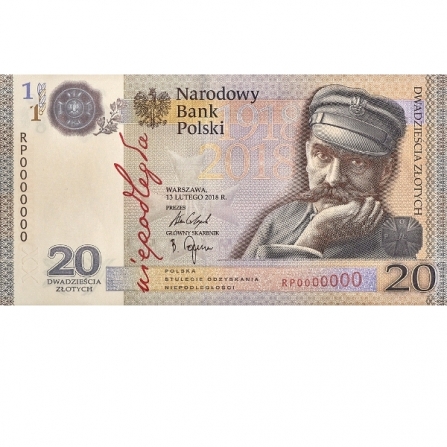 Face value: 20 pln
Dimensions: 150 x 77 mm
Mintage: 50000 pcs
Date of issue: 2018-08-31
Issue price: 75 pln
Designer: Agnieszka Próchniak
The back side of the banknote is dominated by the Polish national colours and the eagle of the Polish Legions, holding in its claws a pelta shield with the letter “S” for “strzelcy” (riflemen). Around it there is an inscription: RZECZPOSPOLITA POLSKA (THE REPUBLIC OF POLAND). This is a reference to the commemorative coins with face values of 5 and 10 złoty, which were minted in 1934 on the 20th anniversary of the march out of the First Cadre Company and which were designed by the sculptor Stanisław Kazimierz Ostrowski.
Piłsudski launched vigorous efforts aimed at organizing the government and the army. As the commander-in-chief of the Polish army, on 16 November he notified the governments of world powers of the rebirth of an independent, sovereign and democratic Poland. It is precisely the fragments of this diplomatic note that appear on the front side of the banknote, alongside the portrait of Piłsudski in the uniform of the Polish Legions. Another reference to the theme of the Polish Legions is the commemorative badge of the 1st Brigade of the Polish Legions and the badge of the Polish Military Organization, which played a great role in the effort to seize control over the country and in the consolidation of its external borders. Narodowy Bank Polski ul. Świętokrzyska 11/21 00–919 Warszawa tel. 22 185 10 00 e-mail: listy@nbp.pl NarodowyBankPolski NBPtv @nbppl Apart from the abbreviated names of the organizations, both badges also bear Józef Piłsudski’s initials – JP. The front side of the banknote also includes a schematic image of the Order of Polonia Restituta badge with the engraved date 1918, as well as the inscription “niepodległa” (independent), reproduced from Piłsudski’s manuscript. It also serves as the logo of the celebrations of the 100th anniversary of Poland regaining its independence. 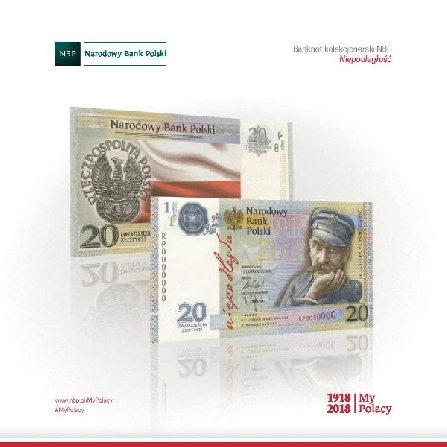 An all-out war between the partitioning powers, which Adam Mickiewicz once prayed for, provided the Polish people with a chance to regain their independence. The road to freedom proved to be very long, however, and Poles had to make huge sacrifices along the way. As the subjects of hostile empires, they were fighting in the armies of the partitioning powers. However, some of them were lucky enough to fight in Polish national uniforms. A simple, grey-coloured military uniform was donned by the riflemen who were led by Józef Piłsudski and who crossed the borders of the Congress Kingdom of Poland in August 1914 in order to fight against Russia. They were convinced that only military struggle could bring about the desired freedom that many generations had unsuccessfully ...