Poland´s Accession to the European Union 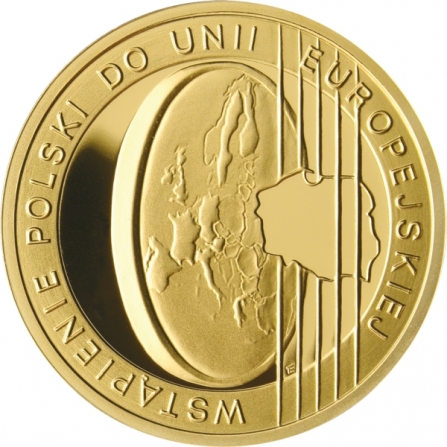 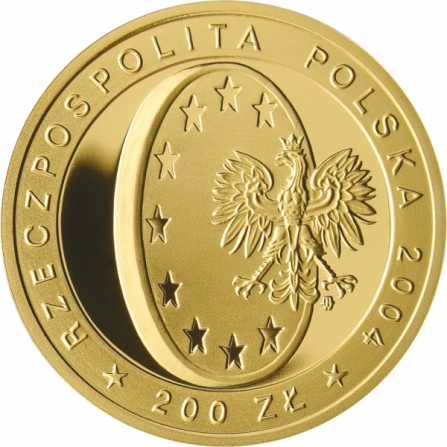 Subject: no
Face value: 200 pln
Alloy: 900/1000 Au
Diameter: 27 mm
Weight: 15.5 g
Finish: proof
Mintage: 4400 pcs
On the edge: smooth
Additional: no
Date of issue: 2004-04-26
Issue price: 1080 pln
In the central part a disc with a stylised map of Europe, on the right side a stylised map of Poland, and against this background five vertical lines extending across the entire coin. Around, the inscription: WSTĄPIENIE POLSKI DO UNII EUROPEJSKIEJ [Poland's Accession to the European Union].

Designer: Ewa Tyc-Karpińska
On the right side the image of the Eagle established as the state Emblem of the Republic of Poland, against the background of a stylised disc with starlets.Around, the inscription: RZECZPOSPOLITA POLSKA [the Republic of Poland] and notation of the year of issue: 2004, as well as the inscription: 200 Zü, separated by starlets. The Mint's mark m/w: under the Eagle's left claw. 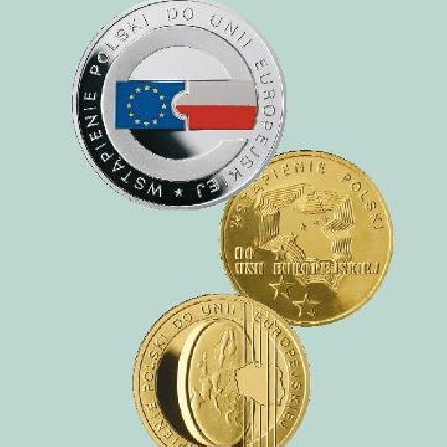 On May 1, Poland became a member of the European Union. For Europe then overcame its long standing division and the EU took on a shape Europe's Founding Fathers dreamt of. Indeed, Europe's future will hereafter unfold together with Poland. Which is to say that the postulates of the Hague Congress (May 8-10, 1948) - 56 years after their formulation - have come to fruition. Therein, the free nations of Europe demanded freedom for the peoples of Europe held captive by communism, proclaiming, "... we refuse to accept as permanent the barriers which now separate us from our fellow Europeans in the rest of the Continent. We must continue ceaselessly to hope and work for the unity of all Europe".

For long years the labour on behalf of stabilization and prosperity ...