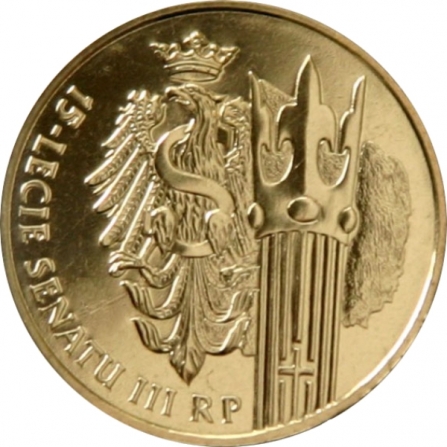 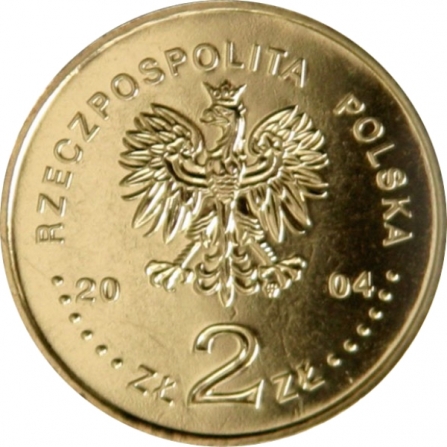 Subject: no
Face value: 2 pln
Alloy: (CuAl5Zn5Sn1) NG
Diameter: 27 mm
Weight: 8.15 g
Finish: standard
Mintage: 760000 pcs
On the edge: an inscription, NBP, repeated eight times, every second one inverted by 180 degrees, separated by stars
Additional: no
Date of issue: 2004-05-24
Issue price: 2 pln
Image of the Speaker's mace on the right-hand side. Centre in the background, stylised image of the Eagle from the bas-relief in the seat of the Senate of the Republic of Poland. Inscription, 15-LECIE SENATU III RP (15th anniversary of the Senate of the Third Republic of Poland), below and left. 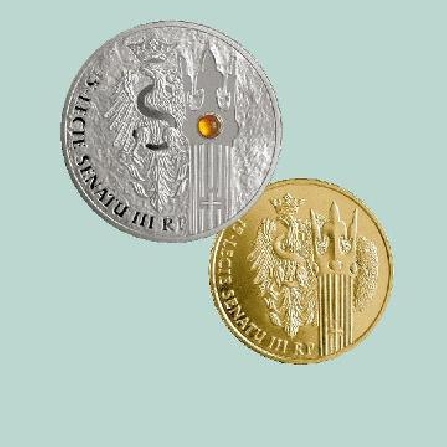 From the very beginning of its five-century history, the Polish parliamentary system developed as a two-chamber structure, with the House of Deputies (izba poselska) and the Senate. The third "Parliamentary Estate" was the Monarch. For passing laws, the consent of all three agents was essential. The House of Deputies was an elected body; but Senators, the kingdom's dignitaries - voivodes (palatines), castellans, high-ranking state officials and the highest-ranking ecclesiasts - were appointed for life by the King. The Senate had the right to veto a bill and to initiate its own draft bills.

An integral part of the Polish constitutional tradition, the Senate was maintained in the Duchy of Warsaw and the Kingdom of Poland, 19th-century constitutional structures ...