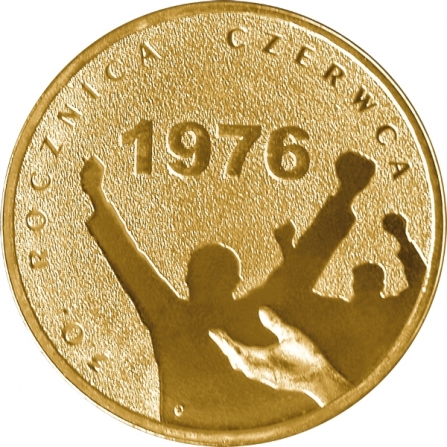 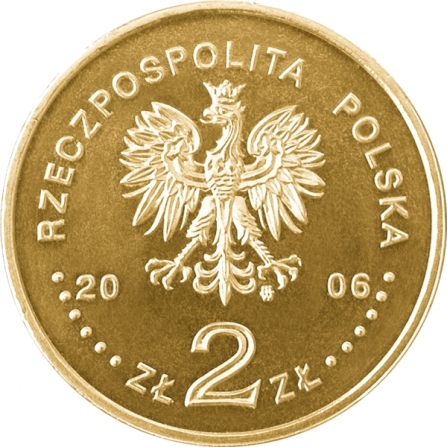 Subject: Polish Road to Freedom
Face value: 2 pln
Alloy: (CuAl5Zn5Sn1) NG
Diameter: 27 mm
Weight: 8.15 g
Finish: standard
Mintage: 1000000 pcs
On the edge: an inscription, NBP, repeated eight times, every second one inverted by 180 degrees, separated by stars
Additional: no
Date of issue: 2006-06-21
Issue price: 2 pln
In the central part, an inscription, 1976. Below the inscription, against the background of stylised silhouettes of two men with their arms raised, on the right-hand side, a stylised image of a hand. On the left-hand side and at the top, a semicircular inscription, 30. ROCZNICA CZERWCA (30th anniversary of June).

In the first half of the 1970s Poland saw some progress in its living standards. The progress, however, relied upon a fragile foundation such as increasing foreign debt and lack of proper reform to boost the economy. To raise finance through loans, the Edward Gierek government strengthened its liaison with Western countries, but at the same time it was generous with servile gestures towards Moscow. Aspirations for amendments to the Constitution i.e. incorporating a legal formula providing for the leading role of the governing party and a permanent alliance with the Soviet Union, triggered movements among intellectuals and university students in 1975.

When the first foreign loan repayments became due and payable, economic difficulties intensified. Again, the ...