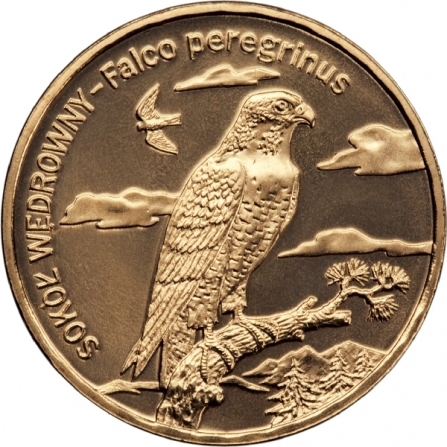 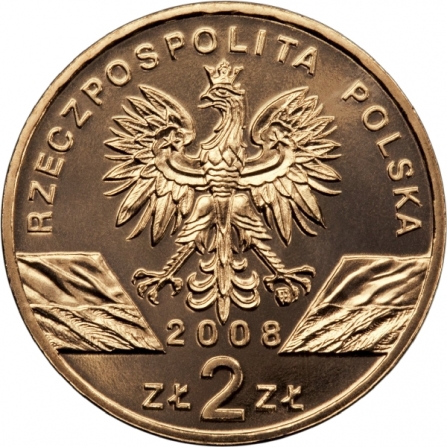 Subject: Animals of the World
Face value: 2 pln
Alloy: (CuAl5Zn5Sn1) NG
Diameter: 27 mm
Weight: 8.15 g
Finish: standard
Mintage: 1600000 pcs
On the edge: an inscription, NBP, repeated eight times, every second one inverted by 180 degrees, separated by stars
Additional: no
Date of issue: 2008-01-16
Issue price: 2 pln
An image of a peregrine falcon sitting on a branch. On the top to the left, an image of a peregrine falcon in flight. On the left and on the right of the falcon, stylised images of clouds. At the bottom, on the right, a stylised image representing mountains and trees. On the left, a semicircular inscription, SOKÓŁ WĘDROWNY - Falco peregrinus.

Designer: Roussanka Nowakowska
An image of the Eagle established as the State Emblem of the Republic of Poland. Under the Eagle, the notation of the year of issue, 2008, below, an inscription, ZŁ 2 ZŁ. The images of the Polish national flag on the sides of the Eagle's legs. At the top, a semicircular inscription, RZECZPOSPOLITA POLSKA. The Mint's mark under the eagle's left leg, M/W. 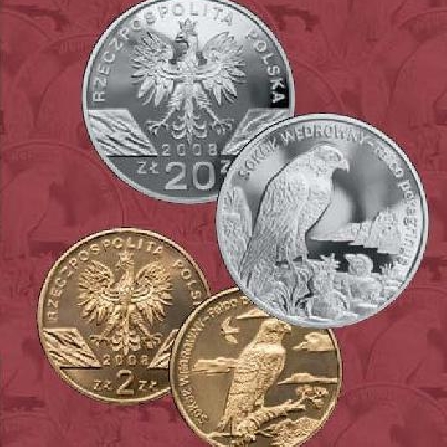 The Peregrine Falcon (Falco peregrinus) can be found throughout most the world. Once widespread in Poland, it never occurred in large numbers. Although in the 1960s the species was extinct in Poland, at least ten pairs of falcons live now in our country. Credit for the recovery of the population can be attributed to the efforts of falconers and conservationists.

The species is now legally protected and has been included in the Polish Red Data Book of Animals, a publication which lists the endangered species. Measures to protect Peregrines were established as long ago as the Middle Ages. In fact, the Peregrine, on account of its significance to falconry, was one of the first protected species, besides Beaver, Aurochs and European Bison.