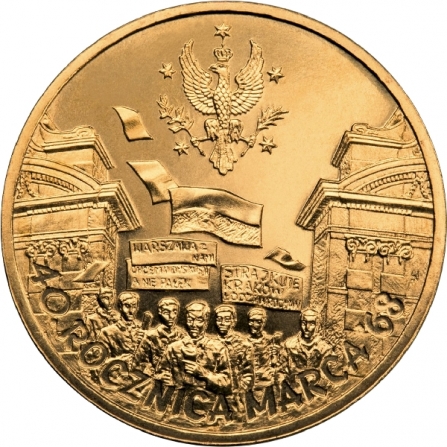 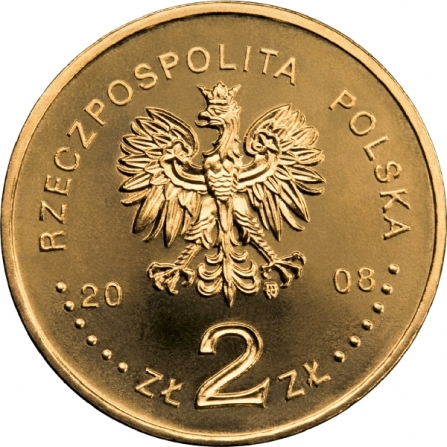 Subject: Polish Road to Freedom
Face value: 2 pln
Alloy: (CuAl5Zn5Sn1) NG
Diameter: 27 mm
Weight: 8.15 g
Finish: standard
Mintage: 1400000 pcs
On the edge: an inscription, NBP, repeated eight times, every second one inverted by 180 degrees, separated by stars
Additional: no
Date of issue: 2008-03-05
Issue price: 2 pln
A stylised image of the main entrance gate of the University of Warsaw. At the top, an image of the Eagle established as the Emblem of the University of Warsaw. Below, a stylised flag symbolizing the Polish national flag, and falling book pages. At the bottom, the stylised images of banners and protesting students between the walls of the entrance gate. Below, a semicircular inscription, 40. ROCZNICA MARCA `68 (40th anniversary of March ?68 events).

Designer: Andrzej Nowakowski
An image of the Eagle established as the State Emblem of the Republic of Poland. At the sides of the Eagle, the notation of the year of issue, 20-08. Below the Eagle, an inscription, ZŁ 2 ZŁ. In the rim, a semicircular inscription, RZECZPOSPOLITA POLSKA, preceded and followed by six pearls. The Mint's mark, M/W, under the Eagle's left leg. 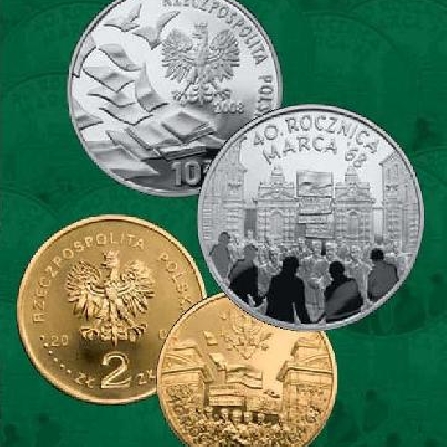 This conventional concept includes a few various and unnecessary interrelated trains of thought. What's more, depending on who uses the concept 'March events', these persons first of all underscore these aspects which primarily concern themselves and the community they used to mingle with. Thus, it is clear that the persons who emigrated from Poland after that March and their relatives who chose to stay in the country most frequently recall the disgraceful anti-Semitic campaign; it was ineptly hidden by official authorities under the banner of anti-Zionism. In such a climate, over 15,000 Jews and citizens of Jewish origin left Poland in the years 1968-1972.

To the people who studied in 1968, the student factor of the Polish March events is the most ...