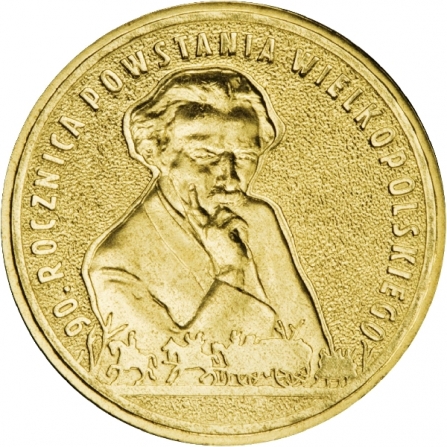 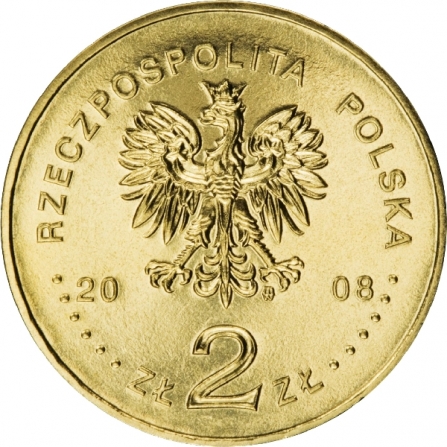 Subject: no
Face value: 2 pln
Alloy: (CuAl5Zn5Sn1) NG
Diameter: 27 mm
Weight: 8.15 g
Finish: standard
Mintage: 1100000 pcs
On the edge: an inscription, NBP, repeated eight times, every second one inverted by 180 degrees, separated by stars
Additional: no
Date of issue: 2008-12-22
Issue price: 2 pln
A stylized image of a bust of Ignacy Jan Paderewski leaning his head against his hand. Against the background of the bust at the bottom a stylized image of a marching party of insurgents of the Greater Poland Uprising. A circumscription: 90. ROCZNICA POWSTANIA WIELKOPOLSKIEGO (90th anniversary of the Greater Poland uprising) in the rim. 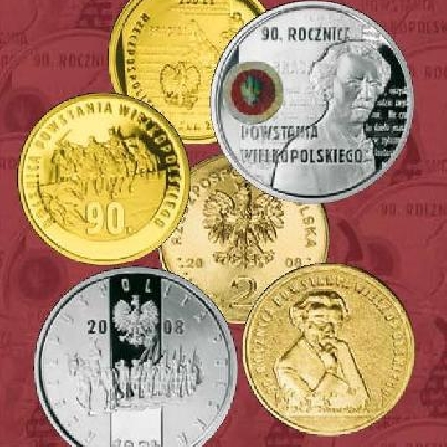 November 1918 brought a cease fire at all fronts of World War I. The armistice signed on 11 November in Compiegne provided for the return to frontiers as of 1 August 1914, which meant that Greater Poland remained within the German state. Amid the prevailing revolutionary chaos in Germany, the Polish community in the Greater Poland did not give up, however, and chose their own representation: the High People's Council. Poles had their own military formations: the People's Guard and the Service and Security Guard. Military training was also started in the 'nests' of the Polish Gymnastic Society 'Falcon'. Alongside independist organisations such as the Polish Military Organisation in the Prussian partition more and more numerous independent storm groups operated. ...