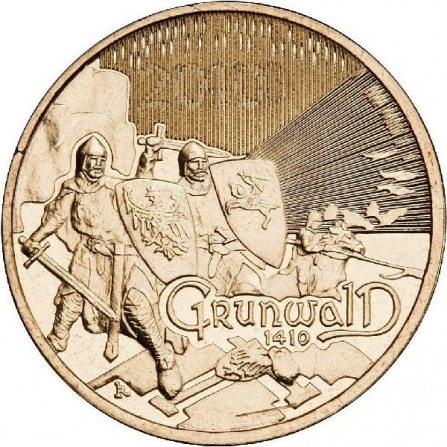 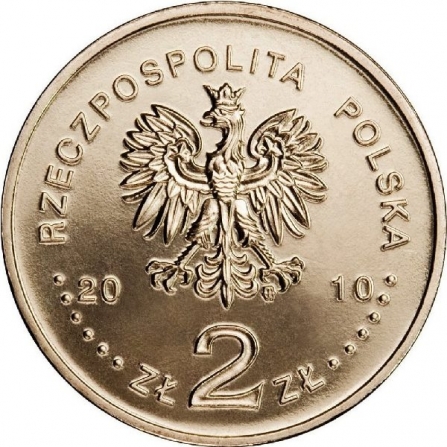 Subject: Great Battles
Face value: 2 pln
Alloy: (CuAl5Zn5Sn1) NG
Diameter: 27 mm
Weight: 8.15 g
Finish: standard
Mintage: 1400000 pcs
On the edge: an inscription, NBP, repeated eight times, every second one inverted by 180 degrees, separated by stars
Additional: angle effect
Date of issue: 2010-07-01
Issue price: 2 pln
In the centre, stylised images of a Polish knight and a Lithuanian knight, holding drawn swords and shields with the emblems of Poland and Lithuania. On the right-hand side, a stylised image of a mounted knight holding a lancet. At the top, against the background of stylised images of knights' lancets two inscriptions, 1410 and 2010, visible depending on the viewing angle. At the bottom, under the knights' feet a lying banner of the Grand Master of the Teutonic Order. Against the background of the banner, a stylised inscription, GRUNWALD/1410. 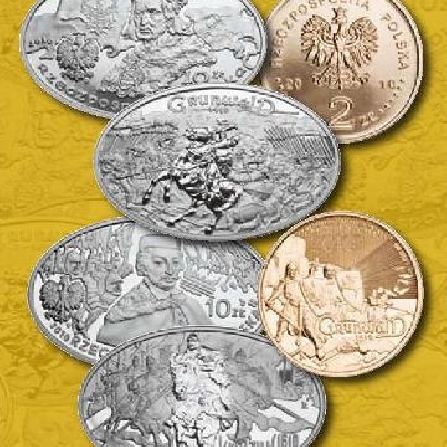 The Polish and Lithuanian forces under the command of King Władysław Jagiełło consisted of approximately 45,000 armed soldiers, mainly cavalry. The Teutonic Knights, headed by the Grand Master Ulrich von Jungingen, had about 16,000 cavalrymen and 5,000 of infantry. The moment when the battle commenced was chosen by the Polish king. Jagiełło purposefully delayed the combat and thus tired the Teutonic Knights, who had been standing in the battle order from the morning. At about noon, the battle began ...