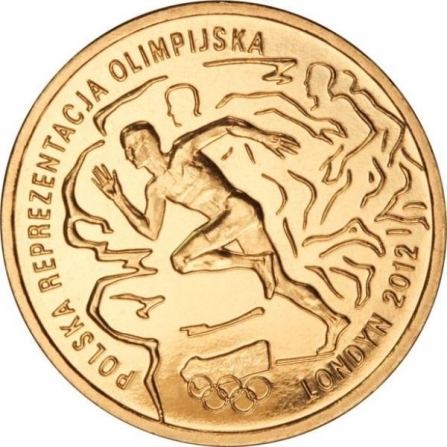 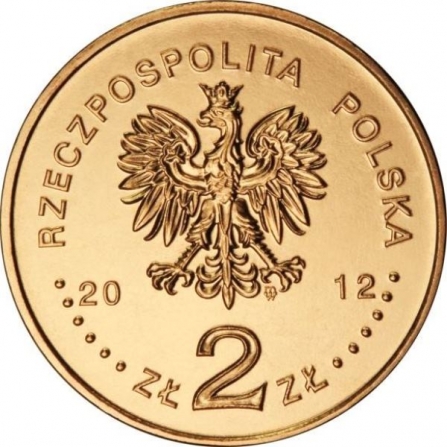 Subject: no
Face value: 2 pln
Alloy: (CuAl5Zn5Sn1) NG
Diameter: 27 mm
Weight: 8.15 g
Finish: standard
Mintage: 1000000 pcs
On the edge: an inscription, NBP, repeated eight times, every second one inverted by 180 degrees, separated by stars
Additional: no
Date of issue: 2012-07-12
Issue price: 2 pln
Centrally, a stylised image of a figure of a running athlete, against interlocked outlines of the silhouettes of other runners. At the bottom, a stylised logo of the Polish Olympic Committee. On the left, at the bottom, in semi-circle, an inscription: POLSKA REPREZENTACJA OLIMPIJSKA [POLISH OLYMPIC TEAM]. On the right, at the bottom, in semi-circle, an inscription: LONDYN 2012 [LONDON 2012]. 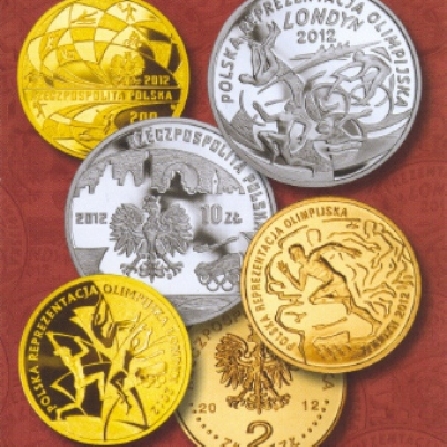 From 27 July until 12 August 2012 the entire world of sports will be meeting in London – to take part in the Games of the XXX Olympiad. The capital of the United Kingdom – as the first city in history – will host Olympians, this time from over 200 countries, for the third time. Earlier, such events took place in 1908 and, 40 years later, in 1948. London was chosen as the host city of the 2012 Olympic Games at the session of the International Olympic Committee in Singapore in July 2005. It won only in the fourth round of voting, with a slight (54:50) advantage over Paris (earlier rounds saw the elimination of Moscow, New York and Madrid). The preparations were started immediately and… were completed on time. In the city itself and in its suburbs many modern ...