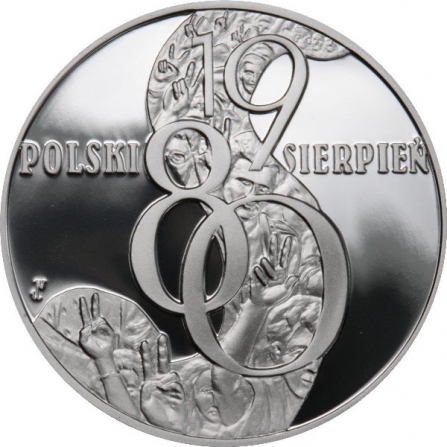 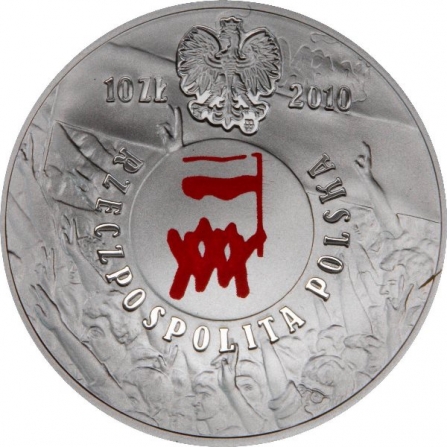 Subject: no
Face value: 10 pln
Alloy: 925/1000 Ag
Diameter: 32 mm
Weight: 14.14 g
Finish: proof
Mintage: 50000 pcs
On the edge: smooth
Additional: pad printing
Date of issue: 2010-08-30
Issue price: 70 pln
In the centre, against the background of letter S in which images of people with their arms raised in a gesture of victory were placed, stylised inscription: 1980, vertically. On the left-hand side, inscription: POLSKI (Polish), on the right-hand side, inscription: SIERPIEŃ (August).

Designer: Urszula Walerzak
At the top, against the background of the Polish flag with a stylised inscription: SOLIDARNOŚĆ (Solidarity), an image of the Eagle established as the State Emblem of the Republic of Poland. On the left side of the Eagle, inscription: 10 ZŁ, on the right, the notation of the year of issue: 2010. In the centre, against the background of the stylised images of people with their arms raised in a gesture of victory, a separated round surface with the logo of the 30th anniversary of the formation of the Independent Self-governing Trade Union “Solidarity”. Around the logo, inscription: RZECZPOSPOLITA POLSKA (Republic of Poland). The Mint’s mark: M/W under the Eagle’s left leg. 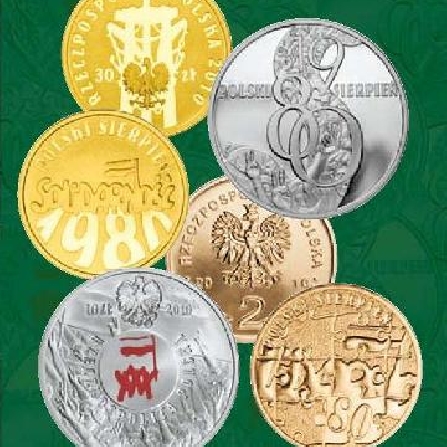 In the mid-70s, the crisis of the command and control economy (a permanent ailment of Real Socialism) aggravated in the People’s Republic of Poland. Edward Gierek’s weakening team, despite intensive efforts by the Ministry of Internal Affairs and its leadership, could not prevent the sprouting of new opposition groups which took place in the years 1976–1980. These groups published clandestine press and books, managing to get their message heard not only amongst the educated classes, but also amongst workers (the Free Trade Unions).

The election of Karol Wojtyła as Pope (16 October 1978) and his first pilgrimage to Poland (June 1979) had a tremendous impact on Poles’ social awareness, increasing the nation’s resistance to communism. The government’s ...