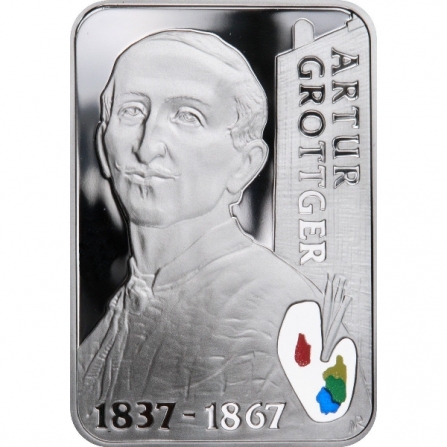 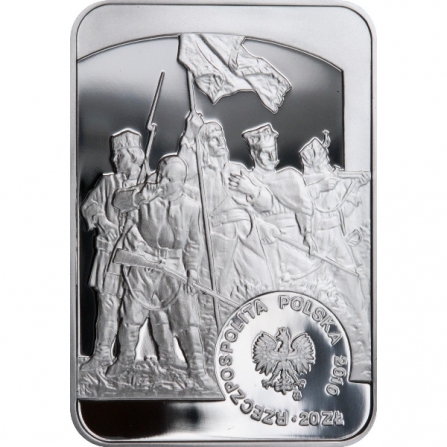 Subject: Polish Painters of the Turn of 19th and 20th Centuries
Face value: 20 pln
Alloy: 925/1000 Ag
Dimensions: 28x40 mm
Weight: 28.28 g
Finish: proof
Mintage: 60000 pcs
On the edge: smooth
Additional: pad printing
Date of issue: 2010-10-28
Issue price: 145 pln
In the centre, a stylised image of Artur Grottger's bust. on the right- hand side, against an easel in the background, a perpendicular inscription: ARTUR / GROTTGER. At the bottom, an inscription: 1837-1867. on the right, a stylised image of a palette and three paintbrushes. on the palette, red, yellow, green and blue paints.

Designer: Roussanka Nowakowska
In the centre, a stylised fragment of Artur Grottger's drawing entitled "The Battle" from the series "Polonia". At the bottom on the right, an image of the eagle established as the State emblem of the republic of Poland. Surrounding the eagle, an inscription: 20 zŁ and, after a separating interpunct, an inscription: RZECZPOSPOLITA POLSKA (Republic of Poland) and notation of the year of issue: 2010. The Mint's mark: M/W, under the eagle's left leg. 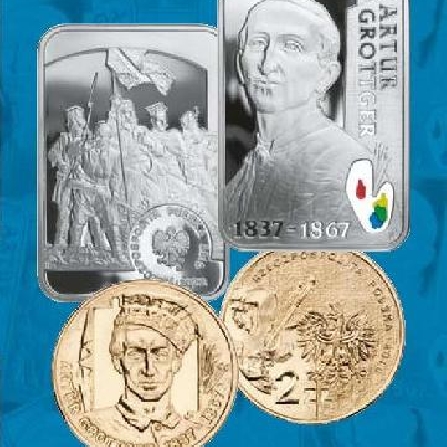