Uhlan of the Second Republic of Poland 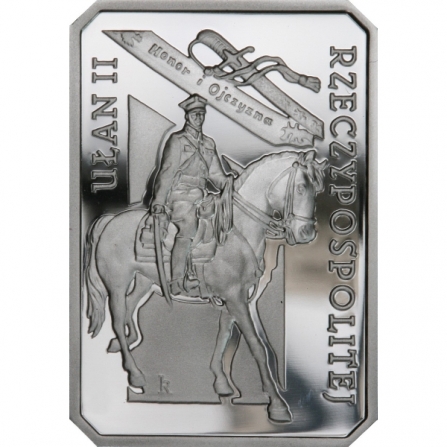 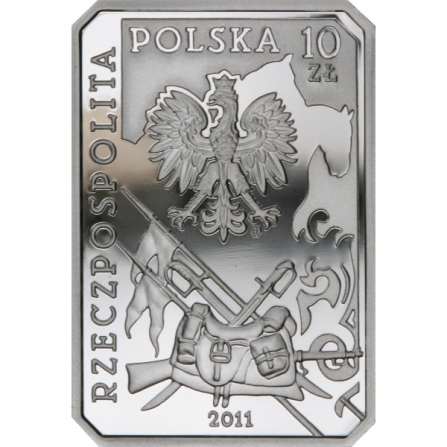 Subject: History of the Polish Cavalry
Face value: 10 pln
Alloy: 925/1000 Ag
Dimensions: 22.4x32 mm
Weight: 14.14 g
Finish: proof
Mintage: 50000 pcs
On the edge: smooth
Additional: no
Date of issue: 2011-07-15
Issue price: 94 pln
Along the left edge of the coin, inscription: UŁAN II (Uhlan of the 2nd). Along the right edge of the coin, inscription: RZECZYPOSPOLITEJ (Polish Republic). In the centre, stylised image of a mounted uhlan holding a sabre. Above, stylised images of: a fragment of a sabre with the inscription “Honour and the Motherland” and another fragment of a sabre featuring the hilt.

Designer: Robert Kotowicz
Along the left edge of the coin, inscription: RZECZPOSPOLITA (Republic). Along the upper edge of the coin, inscription: POLSKA (of Poland). At the top on the right, inscription: 10/ZŁ. In the centre, against the background of stylised shapes of horses, image of the Eagle established as the State Emblem of the Republic of Poland. Below the Eagle, stylised images of elements of a uhlan’s weapons and equipment: lances, a sabre, a carbine and a saddle. Below, notation of the year of issue: 2011. Under the Eagle’s left leg, the Mint’s mark: M/W. 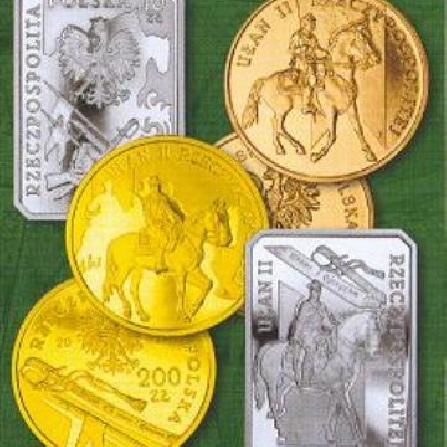 In the armed forces of the 2nd Polish Republic cavalry was beside infantry and artillery one the three main branches of the armed forces. Its beginnings are related to the revival of the Polish State in the autumn of 1918. First cavalry units were formed from Polish units fighting at various fronts of the 1st World War. Formally, cavalry was divided into uhlans, cheveux-legers (as a reference to the tradition of Polish Legions) and mounted rifle regiments. In 1918–1921 cavalry actively participated in the fighting for the establishment of the frontiers of the Polish state. During the Polish-Bolshevik war, it achieved many victories, e.g. on 31 August 1920 at Komarów, in the last great cavalry battle in the world’s military history, it defeated the units of ...