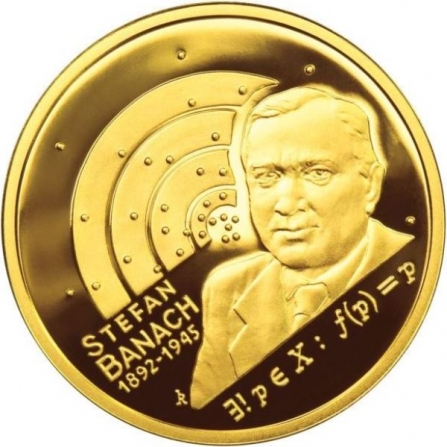 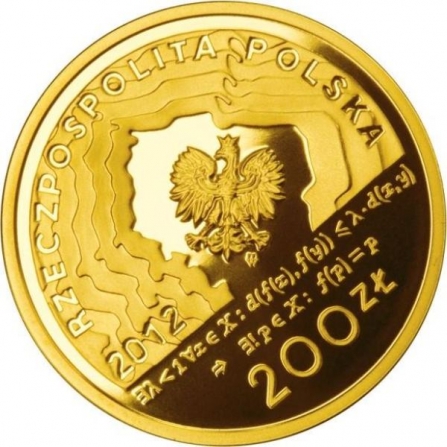 Subject: no
Face value: 200 pln
Alloy: 900/1000 Au
Diameter: 27 mm
Weight: 15.5 g
Finish: proof
Mintage: 4000 pcs
On the edge: smooth
Additional: no
Date of issue: 2012-04-03
Issue price: 2730 pln
On the right, against the background of a geometric pattern, a stylised image of a bust of Stefan Banach. Below it, on the right, obliquely, against the background of an isolated area, a mathematical formula illustrating the thesis of the Banach fixedpoint theorem. On the left, diagonally, an inscription: STEFAN/BANACH. Below it, an inscription: 1892-1945.

Designer: Robert Kotowicz
In the centre, an image of the Eagle established as the state emblem of the Republic of Poland, against the background of isolated planes being the outline of the territory of Poland. Below the Eagle, on the left, obliquely, the notation of the year of issue: 2012. At the bottom, diagonally, in an isolated area, a formula appearing in the Banach fixed-point theorem. Underneath, diagonally, an inscription: 200 ZŁ. At the top, a semicircular inscription: RZECZPOSPOLITA POLSKA (Republic of Poland). Under the Eagle, on the right, the Mint’s mark: M/W. 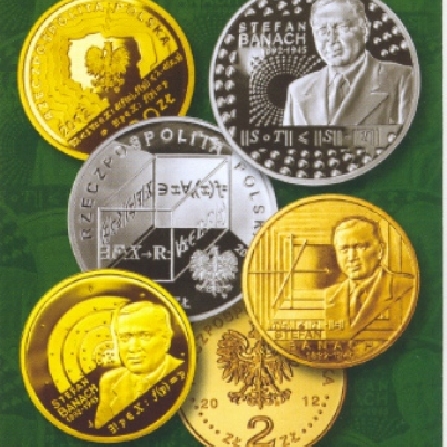 Stefan Banach (1892-1945) was the greatest Polish mathematician and co-founder of the famous Polish School of Mathematics developed in the interwar period of 1918-1939. One of the major prizes of the Polish Mathematical Society (which he co-founded and chaired in the years 1939-1945) and the medal of the Polish Academy of Sciences awarded alternately to either a Polish or a foreign mathematician every year, are named after Stefan Banach. His name is associated with a number of mathematical concepts and theorems, in particular the concept of Banach spaces, the Hahn-Banach theorem and the Banach fixed-point theorem (to which the images on the collector coins are linked). These concepts and theorems are presently not only known to professional mathematicians, but also to students ...