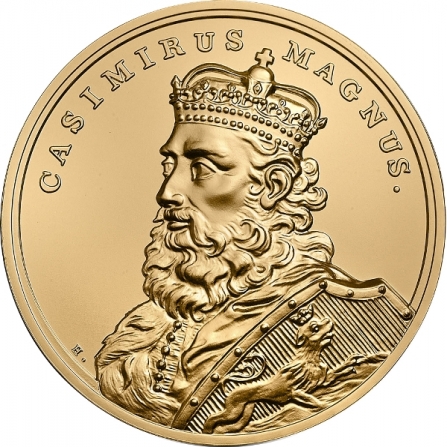 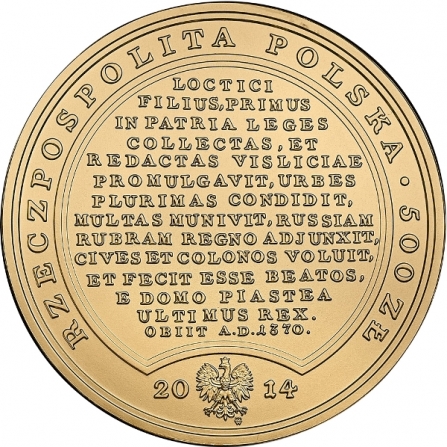 Subject: Treasures of King Stanislaw August
Face value: 500 pln
Alloy: 999.9/1000 Au
Diameter: 45 mm
Weight: 62.2 g
Finish: standard
Mintage: 750 pcs
On the edge: SKARBY STANISŁAWA AUGUSTA * KAZIMIERZ WIELKI *
Additional: no
Date of issue: 2014-03-03
Issue price: 11750 pln
The reverse of a coin is a faithful replica of a medal with an image of a bust of king Casimir the Great, based on a portrait painted between 1768 and 1771 by Marcello Bacciarelli for the Marble Room at the Royal Castle in Warsaw. In the upper part of the coin, along the rim – an inscription in Latin: CASIMIRUS MAGNUS.

Designer: Anna Wątróbska-Wdowiarska
In the central part of the coin – a replica of the medal obverse with a short biography of King Casimir the Great in Latin as follows: Son of Elbow-High, the first who collected all lex patriae and announced them in Wislica, fortified many towns, joined Red Ruthenia to the monarchy, wished to make citizens and farmers contented and fulfilled this wish; the last of the Piast dynasty. He died in 1370, after 33 years of ruling Poland, at the age of 60, on 5th November. Along the rim – inscriptions: RZECZPOSPOLITA POLSKA (Republic of Poland), 500 ZŁ (the face value). At the bottom – the year of issue (2014) and a miniature emblem of the Republic of Poland (white eagle wearing a crown). 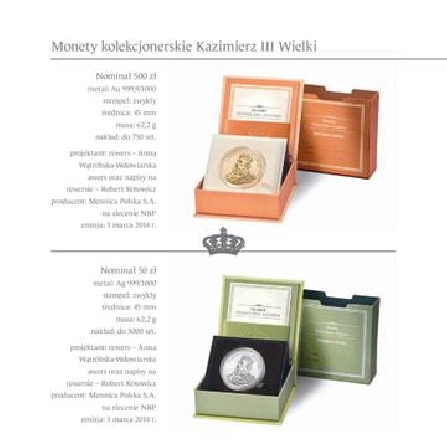