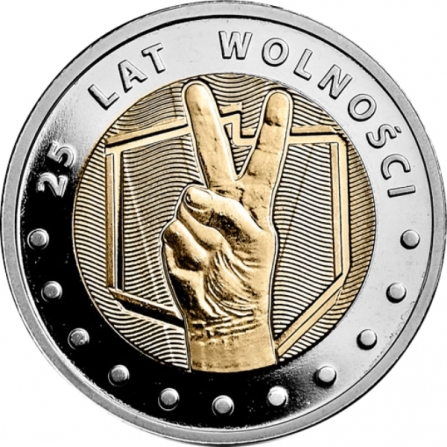 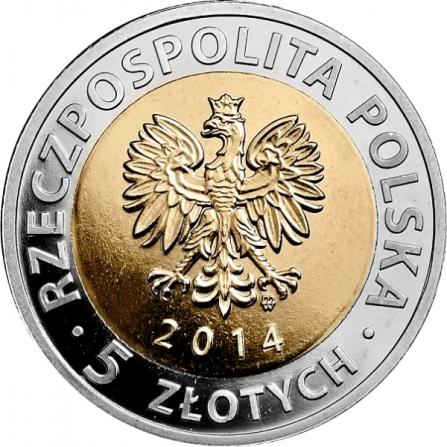 Subject: Discover Poland
Face value: 5 pln
Alloy: (MN25/CuAl6Ni2) MN
Diameter: 24 mm
Weight: 6.54 g
Finish: standard
Mintage: 1500000 pcs
On the edge: irregularly milled; on the side an inscription: NBP, repeated eight times, every second one inverted by 180°, separated by stars
Additional: no
Date of issue: 2014-05-22
Issue price: 5 pln
In the foreground – theVictoria gesture which is a symbol of victory and freedom. In the background – a contour of the map of Poland on a stylized decorative surface. In the upper part of the coin, along the rim – the name of the coin in Polish: 25 LAT WOLNOŚCI. In the lower part of the coin – elements in the form of dots.

Designer: Dobrochna Surajewska
In the central part of the coin – an image of the coat of arms eagle from the Republic of Poland. Below – the year of issue: 2014. Along the rim – the face value: 5 zloty and the issuing country: RZECZPOSPOLITA POLSKA. 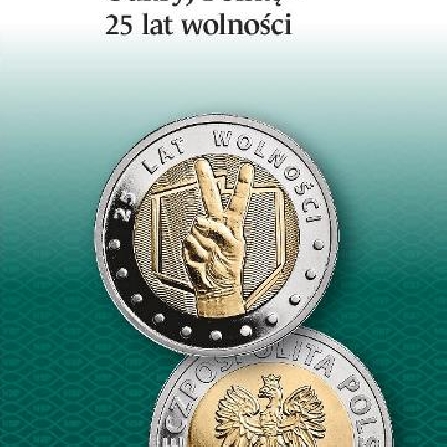 It had no right to happen. Twenty-five years ago, even the best of optimists did not believe in the fall of Communism. Poles were weary and dismayed: by Martial Law, by the rationing of meat and sugar, and by the fruitless attempts to reform the country. They wanted to live like people in Western Europe. The strikes of August 1988 were a manifestation of social discontent and at the same time a warning to those in power that a new threat was about to erupt.

But the authorities were tired by the futility of their own actions; they were aware that without a popular mandate they could not reform the economy and ensure peace for the nation. It was in this climate that representatives of Solidarity, independent experts, and members of the political ...