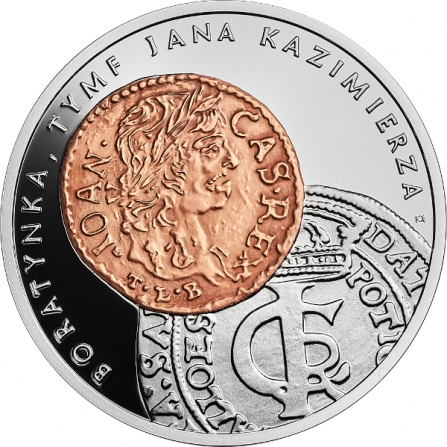 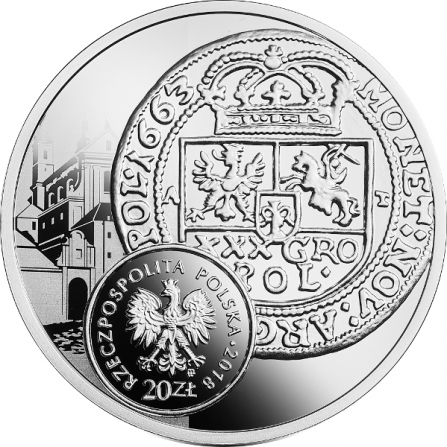 Subject: History of Polish Coin
Face value: 20 pln
Alloy: 925/1000 Ag
Diameter: 38.61 mm
Weight: 28.28 g
Finish: proof
Mintage: 18000 pcs
On the edge: smooth
Additional: no
Date of issue: 2018-07-12
Issue price: 180 pln
On the reverse of the coin, we see the obverse of the tymf featuring a big regal monogram surmounted by the crown – ICR (Johannes Casimirus Rex). Circularly, along the rim, in two lines, there is an unusual inscription explaining the low quality of that coin: DAT·PRETIVM·SERVATA·SALVS· / POTIORQ3·METALLO EST, which means: “The value [of this coin] is defined by the preserved interests of [Rzeczpospolita (Commonwealth)], which is worth more than the metal”.

Designer: Dominika Karpińska-Kopiec
The obverse of the coin features the reverse of a tymf, on which, below the crown, there is an uncharacteristic four-field escutcheon; the escutcheon is flanked by letters the A – T (Andreas Tümphe). The two upper fields of the escutcheon depict an Eagle and Pogoń [a mounted knight with a raised sword], the coat-of-arms of the Crown of the Kingdom of Poland and Lithuania, respectively. The lower field includes an inscription specifying the denomination of the coin: XXX GRO / ·POL·; in the central part: the Garb (Sheaf of Wheat of the House of Vasa). Along the rim, the inscription reads MONET[A]:NOV[A]: ARG[ENTEA]:REG[NI] POL[ONIAE] 1663, which means: “a new silver coin of the Kingdom of Poland”. In the background of the reverse of the tymf, there is a mandatory certification in the form of a round imprint with data specifying the issuer of the contemporary coin, i.e. the Eagle, the inscription: RZECZPOSPOLITA POLSKA, the year of issue: 2018 and the face value of 20 złoty. An architectural motif – a silhouette of a late-Baroque Camaldolese church (from the turn of the 17th and 18th centuries) funded by John Casimir in Wigry has been selected to make the coin more attractive, and, at the same time, to make those times more familiar. Using the laser ground printing technique, this motif has been placed in the empty field to the left side of the escutcheon as its background.