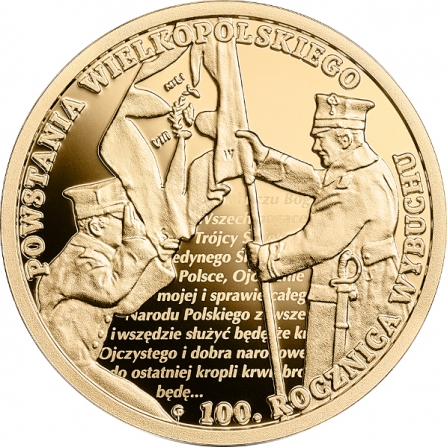 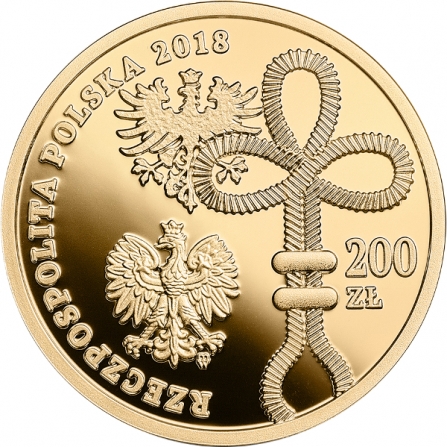 Subject: no
Face value: 200 pln
Alloy: 900/1000 Au
Diameter: 27 mm
Weight: 15.5 g
Finish: proof
Mintage: 1500 pcs
On the edge: smooth
Additional: no
Date of issue: 2018-12-12
Issue price: 3000 pln
On the reverse of the gold coin General Józef Dowbor-Muśnicki, Commander- in-Chief of the Polish Armed Forces of the former Prussian Partition, hands a banner to General Filip Dubiski, commander of the 1st Division of Greater Poland Rifles. In the background there is a fragment of the text of the oath taken by the Greater Polish Army on 26 January 1919 in Poznań.

Designer: Grzegorz Pfeifer
The obverse features the eagle adopted as an emblem by the insurrectionists next to the present-day Eagle established as the emblem of the Polish state. On the right there is a clubshaped distinction from a general’s cap. 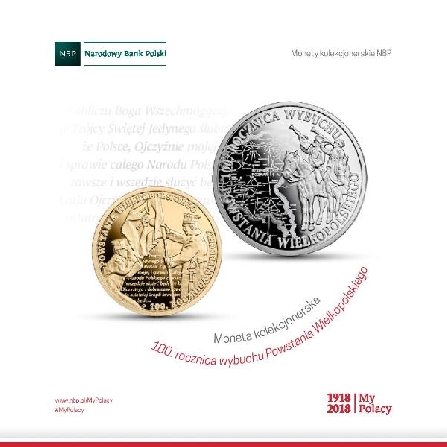 11 November 1918 brought the end of World War I. Despite Germany’s capitulation, the province of Greater Poland was still under occupation and its future was to be decided at a peace conference. However, the anarchy in the German army and the outbreak of the German revolution created favourable conditions for the armed struggle for the incorporation of Greater Poland into the Polish state. In Poznań Poles set up a Workers’ Council and a Supreme People’s Council headed by a Commissariat, while on 13 November they took over the German-dominated Soldiers’ Council. On 3 December the Sejm of the province convened in Poznań. It was a parliament representing those Poles who still remained within German borders and the march of its delegates became a prelude ...