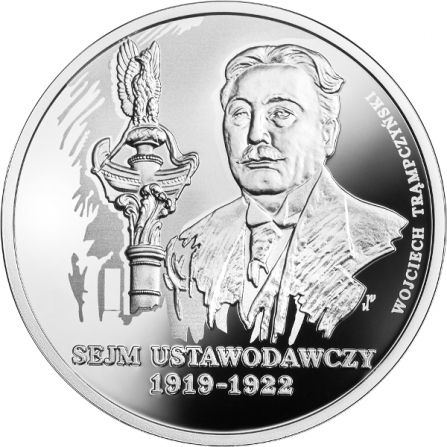 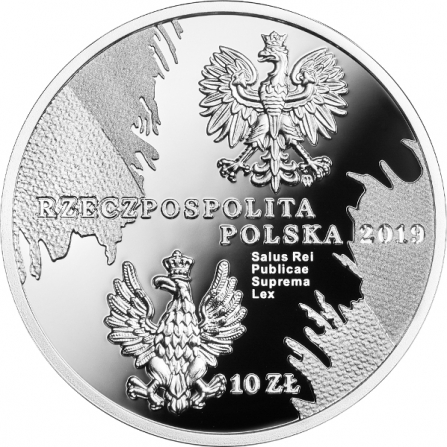 Subject: no
Face value: 10 pln
Alloy: 925/1000 Ag
Diameter: 32 mm
Weight: 14.14 g
Finish: proof
Mintage: 15000 pcs
On the edge: smooth
Additional: no
Date of issue: 2019-02-08
Issue price: 120 pln
The reverse of the coin commemorating the 100th anniversary of the establishment of the Legislative Sejm features the portrait of Wojciech Trąmpczyński (1860-1953) and the head of his Marshal’s staff. The head of the staff (stormy sea waves) carries a single-masted boat with a sail and shrouds (the symbol of the state). In place of the crow’s nest there is an oak wreath (symbolising victory) on top of which an eagle is perched with a crown and outstretched wings (the White Eagle).

Designer: Urszula Walerzak
The obverse of the coin features – to emphasise the continuity of parliamentary traditions – the emblems of the Second and Third Republic of Poland against the Polish flag, and the inscription Salus rei publicae suprema lex (the Welfare of the Republic shall be the Supreme Law). The motto, attributed to Cicero or Sallust, was the maxim of the Sejm of the Second Republic of Poland. The Latin proverb was placed above the presidium table in the Session Room of the Sejm in 1919. It also appeared on the medals – “The Opening of the Legislative Sejm” (author: Jan Raszka, dated 1919) and “The Anniversary of the Adoption of the March Constitution, 1922” (author: Feliks Łopieński, dated 1922). 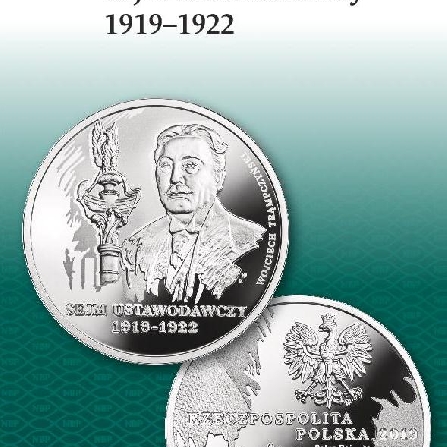 10 February 1919 marks the first session of the Sejm after Poland regained independence. The Chief of State, Józef Piłsudski, in his speech delivered on this occasion, said: “At this hour, as the hearts of Poles are pounding, I feel happy to have the privilege of opening the Polish Sejm, which will now become the sole master and host of its home country again.”

The number of deputies changed several times as a result of the redrawing of Polish borders and the organisation of bye-elections in some frontier areas. Ultimately, in March 1922, the Sejm consisted of 432 deputies. The Legislative Sejm held 342 sessions during which it passed 571 acts. The last session was held on 27 November 1922.

The work of the Legislative Sejm led to the integration ...